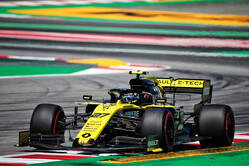 Daniel reached Q3 for the second time in 2019 and posted a 1min 18.106secs in the final part of qualifying. A three-place grid penalty - incurred during the Azerbaijan Grand Prix - will apply to Daniel ahead of tomorrow's race.

Team-mate Nico Hulkenberg was eliminated in Q1 following a mistake on his opening run leading to damage to his front wing, which consequently was replaced. He will line-up sixteenth for tomorrow's race.

Nico Hulkenberg: "I'm quite disappointed with myself about that. I made a mistake on the first run, touched the wall slightly and we had to change the front wing and we also suffered bargeboard damage. If you make mistakes, you pay for them. We could have made Q2 at a minimum today. We're lacking a bit of pace and harmony in the car at the moment. We'll give it our best tomorrow and aim for a better result."

Daniel Ricciardo: "We did a pretty good job to get into Q3 today. That was the target and I certainly felt after yesterday we had the potential to achieve that. We probably could have been slightly higher in the order for Q3 but I lost the rear out of Turn 13 on the second run and lost some time. That stopped it from being a really good session, but, in any case, it was a strong effort today. We have the penalty to add, but we'll get our heads down in the race and look for points."

Alan Permane, Sporting Director: "We have mixed emotions from today's qualifying session. We're reasonably happy with Daniel's result. We could have done a bit more and we know this isn't our favourite track. Nico had a challenging session, going off on his first lap made it difficult for him to recover. Tyre life in the race could make for interesting strategy variations and, as always, we will aim to maximise every opportunity."