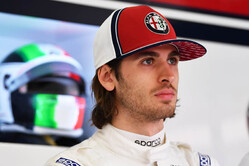 Antonio Giovinazzi has been handed a three-place grid penalty after impeding Nico Hulkenberg in Q2 today.

The stewards who reviewed video evidence and heard from both Giovinazzi and Hulkenberg along with their respective team representatives, deemed that the Alfa Romeo driver was between Turn 16 and 18 when he was warned exceptionally late that the Renault was behind him.

At the time he was in the middle of the track and clearly impeded the German.

The stewards therefore determined that the impeding was unnecessary, and ordered a three grid place drop, consistent with past practice.

The Italian, who had qualified 15th, was also handed a penalty point, his first in the 12 month period.