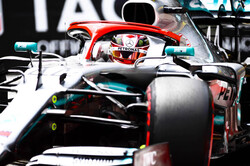 While Charles Leclerc topped the timesheets earlier, the fact is that neither of the Mercedes drivers, nor Max Verstappen, was able to get enough clear track for a decent qualifying sim.

As a result, if you look across the times posted in FP2 and FP3, unsurprisingly Hamilton is quickest, ahead of Bottas, with Leclerc 0.147s off the pace, ahead of Verstappen, Gasly and Vettel.

Indeed, it was mixed session for Ferrari, for while Leclerc topped the timesheets, Sebastian Vettel crashed out early on after locking up and heading into the barriers at Turn 1.

All in all, barring any silliness or over enthusiasm, we expect Verstappen to be the only serious threat to Mercedes locking-out the front row.

Antonio Giovinazzi was a surprise 'best of the rest' earlier, the Italian finishing ahead of Kvyat, Magnussen, Raikkonen and Albon.

No offence intended, but we doubt if Giovinazzi will be able to maintain that sort of form over the next hour.

Though Alfa Romeo is looking good here, so too is Toro Rosso and Haas, while Renault is clearly struggling, though not as much as McLaren and Racing Point.

It goes without saying that a good grid position is vital here, more so than at any other track, and with the threat of rain during tomorrow's race, being at the front becomes even more important.

Other than Vettel's crash there were no significant incidents other than some drivers losing patience in the traffic and others getting mighty close to the barriers. Then again, in a town famous for its Casino, one would expect drivers to push that little bit harder and gamble on that extra couple of thousandths of a second.

While traffic is always an issue here, the good thing is that the softs are good for a number of hots laps, so, as our old Nan used to say, if at first you don't succeed...

Ahead of Q1, the air temperature is 21.2 degrees C, while the track temperature is 43.9 degrees. This is the warmest it's been all weekend and as a result a number of teams have been making set-up changes over the break.

Indeed, in the final moments before Q1 gets underway, mechanics are still swarming over Verstappen's car. That said, in a matter of moments, the car appears ready to go, the driver strapped in, such is the magic of F1.

Norris leads the way when the lights go green, Leclerc and the Silver Arrows are among the early risers.

On his out lap, Vettel thanks the team for its sterling work over the break.

Hulkenberg is seriously impeded by Giovinazzi at Rascasse, as Ricciardo gets up close and very personal with the barriers moments later.

Hamilton improves to second with a 12.099, ahead of Albon, Magnussen and Kvyat.

Bottas is informed that it is in T3 where he's losing out.

The stewards are to investigate that Giovinazzi incident at Rascasse.

After locking-up, how Leclerc avoids the barriers at Rascasse we will never know.

Vettel improves to tenth with a 12.601 as he makes up for the running time he lost earlier.

As Magnussen goes second (11.865), Perez reveals that he hit the wall at T8. The Mexican is currently in the drop zone along with his teammate, the Williams pair and Hulkenberg.

An 11.562 sees Bottas go quickest, the Finn doing well to keep it out of the barriers at the hairpin.

Leclerc has to be pushed back to the weighbridge after missing the signal.

Vettel goes quickest in S1, and after a poor second sector aborts the lap. However, replay shows he clouted the barrier at the Swimming Pool exit.

Sainz improves to seventh, ahead of Giovinazzi and Raikkonen.

Vettel is dropping down the timesheets and looking as though he may miss the cut. With 94 seconds remaining he leaves the pits.

While he is clearly up against it, the German has lots of clear air ahead.

Hamilton has taken the top spot with an 11.542 as Vettel begins his flying lap. He is currently 17th, while Leclerc is 13th and in the pits.

Albon improves to 13th, and as Vettel goes quickest with an 11.434, teammate Leclerc is out.

Incredible, the youngster is out in Q3 for his home Grand Prix. Another strategic cluster**** from the Maranello team.

"I asked whether we were safe, there was no..." says Leclerc. "I don't know but very difficult one to take, we had plenty of time to go out again, we had the fuel to go again. I need some explanations."

As we recover from one of the biggest shocks of recent times, Q2 gets underway and in no time at all 15 drivers are on track.

An 11.693 sees Ricciardo go fourth, as the cameras pick up on Leclerc walking down the paddock, his face, understandably, like thunder.

Asked about his tyres, Verstappen replies, "a bit cold, front and rear".

Hamilton goes second with a 10.835, as Kvyat goes fourth, ahead of Sainz and Ricciardo.

With the tyres lasting for a few hot laps, all the drivers are fuelled up and allowed to go for as many laps as they wish.

A big lock-up and a kiss of the barriers for Magnussen at Mirabeau, as Hamilton is called to the weighbridge, unlike Leclerc he sees the sign.

Ahead of the final assault, Norris, Magnussen, Raikkonen, Giovinazzi and Grosjean comprise the drop zone.

With 5:32 remaining, Grosjean is first out.

In clear air, Grosjean improves to 12th with a 12.027, the Haas driver losing a heap of time in S3 due to traffic.

Kvyat consolidates fourth, but is demoted when Vettel posts 11.227.

Norris improves with an 11.833 and thereby demotes Hulkenberg into the drop zone.

Raikkonen fails to improve and looks set to miss the cut, as Verstappen posts a 10.618 to go quickest.

Hulkenberg improves to ninth as Bottas and Hamilton begin their final hot laps. However, both appear to abort their laps in the second sector.

PBs in S1 for Albon and Norris, who are currently 11th and 12th.

Albon goes sixth with an 11.429, while Norris fails to make the cut.

All eyes on the Haas duo, who posts PBs in the opening sector.

Magnussen goes fifth with an 11.363, while teammate Grosjean fails to make the cut.

Grosjean launches a torrent of profanities as it is reveals he lost time behind Gasly in Casino.