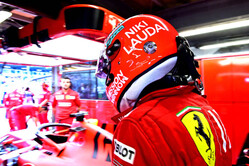 Qualifying for the 66th Monaco Grand Prix proved to be very difficult for Scuderia Ferrari Mission Winnow. Sebastian Vettel will start from the second row, having set the fourth fastest time. Charles Leclerc will start from sixteenth on the grid, as he failed to make the cut out of the first part of the session.

Sebastian went out on track immediately to check his SF90, which had required repairs after hitting the barrier in the third free practice session. He started off with a lap in 1:16.624, before getting down to 1:13.188 and 1:12.601, finally posting a 1:12.335. As for Charles, he did a 1:12.825 on his first run, getting down to 1:12.149, despite encountering traffic. At this point, Sebastian was in danger of being excluded, so he went back out with a new set of tyres to get into Q2 with a time of 1:11.434. Leclerc was kept in the garage to save a set of tyres, which proved to be the wrong decision as track conditions evolved and times steadily improved. This meant that several drivers were able to improve, which left the Monegasque driver unable to make the cut to Q2.

Sebastian started off Q2 with a 1:11.922, getting down to a 1:11.227 on his second quick lap, thus making it comfortably into the final part. In the top ten shoot-out Sebastian immediately posted a 1:10.947 but was unable to improve on his second attempt. The German will therefore start behind Lewis Hamilton, Valtteri Bottas and Max Verstappen.

Sebastian Vettel: "It was a difficult day for the whole team. I ended up in the barrier in the third free practice session, but the guys did a great job to fix the car and get me out for qualifying. Unfortunately, we struggled to get the tyres to work properly in Q1 and that meant I had to use an extra set. I managed to get through, but Charles didn't while he was in 15thplace, which would have been good enough. Unfortunately, these things can happen in Monaco, if you don't have a margin, you have to take risks and it doesn't always go the way you want. We were not as competitive as we would have liked to be in qualifying, but the race is a different matter and in Monaco, anything can happen."

Charles Leclerc: "It's easy to understand how disappointing was this qualifying, as it significantly compromises my home race. The team was convinced that the time I'd done was good enough to get me into Q2, which would mean saving one more set of tyres, but unfortunately I was the first of those knocked out. It's a real shame because I think that today I could have got a good result. Clearly it will be very difficult to recover in the race, because it's almost impossible to overtake here. There's a chance of rain and that would make the race more unpredictable: that could give me a slightly better chance."

Mattia Binotto Team Principal: "Definitely not a good day. In Q1 we made an error of judgement. We thought Charles' time would have been good enough to get into the next part of the session and so we kept him in the garage, sending out just Sebastian who, at that moment, was one of those who was excluded. Track conditions evolved more than we expected the drivers were finding more grip on track. This meant many of them improved their times and as a result, Charles was eliminated. It's a real shame and I am very disappointed for him, especially as it's his home race. Sebastian managed to qualify on the second row and that means he can aim for a good result in the race."