"He could not have done anything else," insists Binotto. 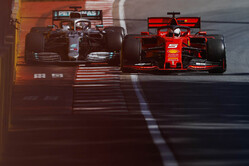 If ever the claim that, opinions are like ***holes because everyone has one, rang true, it is in the wake of yesterday's Canadian Grand Prix, as more and more 'experts' jump on the bandwagon to share their thoughts.

As Ferrari prepares to appeal the stewards decision that cost Sebastian Vettel victory in Montreal, team boss, Mattia Binotto, has come to his defence, arguing that the German - once having made the initial mistake - could do nothing else.

"Obviously it is not down to us to decide, because there are people which are there to decide and what counts is their decision," he told reporters. "Certainly we are not happy and we disagree.

"From our perspective, and I am pretty sure Seb can comment better, he could not have done anything else compared to what he did," he added.

"I think he was even lucky to remain on track. So no intention in what he did at all. He was still ahead and he tried to keep his position on track. It is as simple as that.

"We disagree with the decision, no doubt, but all of us may have our own opinion," he admitted. "The crowd has its clear opinion today and I think not only the crowd, but whoever you may ask, so somehow we are really disappointed with what happened.

"I think there has been really similar situations in the past as well which have not been judged like today, so overall I don't think it has been the right decision. But again, it doesn't matter," he concluded, referring to his own personal opinion of the situation.