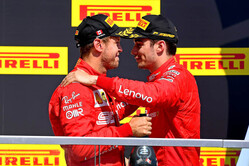 Scuderia Ferrari finished second and third in the 50th Canadian Formula 1 Grand Prix, after Sebastian Vettel was given a five second penalty which dropped him behind Lewis Hamilton, even though the German was first across the finish line. Sebastian produced a masterly performance following on from yesterday's pole. He led from start to finish, keeping the reigning world champion behind him. Charles Leclerc took the second podium of his career, following on from his third place finish in Bahrain.

Sebastian maintained his pole advantage at the start over Hamilton, while Charles got alongside the Englishman in Turn 1, but he had to give best to avoid a probable collision. From lap 2 onwards, it was a close fight between the German Ferrari driver and the Englishman's Mercedes and it went all the way to the chequered flag.

Sebastian pitted on lap 26, switching from the medium to the hard tyres, rejoining third. Two laps later, Hamilton came in, rejoining behind Charles and Sebastian who was back in the lead at this point. The team tried to lengthen the stint at this point to try and make the most of any Safety Car situation that might arise, as it often does in Montreal, which would have allowed him to close up the ten second gap, meaning he could again fight for the win. On lap 33, Charles stopped to go from mediums to hards, coming out behind Max Verstappen, who had started on the hard tyres on a different strategy. Leclerc took a lap to warm up his new tyres and then on lap 35, he retook third place.

The key incident of the race came on lap 48, when Sebastian lost the rear of his SF90 at Turn 3, rejoining at turn 4 having gone off on the grass, but keeping the lead. The stewards however decided that Sebastian had rejoined unsafely forcing Hamilton off track and thus came the 5 second penalty to be added to his total race time. Sebastian crossed the finish line ahead of Hamilton and Leclerc, but the penalty swapped the order of the first two drivers on the podium.

Sebastian Vettel: "I think we had a great race and the stewards' decision is too harsh. In turn 3, I lost control of my car and I had to run long onto the grass, rejoining at turn 4 ahead of Lewis. I couldn't see where he was, as I was too busy trying to keep my car on track without crashing and I didn't squeeze him on purpose.

"I think given the way things went this weekend and even though our rivals' race pace was very strong, we deserved the win, and I get the impression that lots of the spectators here today at the circuit agree with me. It's always nice to race in Canada, I feel a lot of support from the people and it would have been wonderful to have given all our fans the first big result of the season."

Charles Leclerc: "I am quite happy with my race today, despite it having been a rather lonely one for me. I think that we couldn't have got a better result and our performance was strong from the first to the last lap. At the same time, it is a shame for the team to have lost the first win of the season. I look forward to the next race in France now. It is difficult to say where we will stand there, as the circuit here in Montreal suits our car very well, but we will work as hard as we can to continue improving and fighting for strong results."

Mattia Binotto Team Principal: "At the moment, we, as a team, are naturally disappointed, but most of all our thoughts are with Sebastian and the spectators. As for Seb, I don't think he could have done things differently, which is why we have decided to appeal the Stewards' decision.

"We leave Canada knowing that today, as indeed over the whole weekend, we proved we were competitive and that fact has been a confidence booster for the whole team."