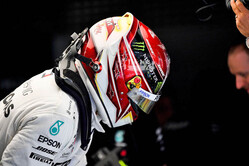 Lewis Hamilton has been excused media duties at Paul Ricard today in order that he can attend a memorial event for fashion designer Karl Lagerfeld.

The decision to allow him to miss today's media events as the French Grand Prix weekend gets underway, comes weeks after he drew criticism in some quarters for missing the opening day of the Monaco weekend as he and his team mourned the loss of Niki Lauda.

While Lagerfeld passed away in February, it was requested that there be no public funeral and instead a private service was held in Nanterre.

However, a memorial event for the 85-year-old German, who was creative director for Chanel, was organised by his friends for today, and Hamilton sought the permission of his team and the FIA to attend.

Check out our Thursday gallery from Le Castellet, here.