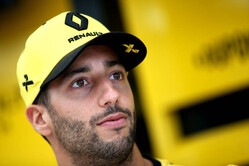 Daniel Ricciardo, who finished seventh in today's French Grand Prix, was subsequently demoted to 11th after he was handed two separate time penalties for two incident late in the race.

The first involved Lando Norris, who was under pressure from Ricciardo as he battled with a hydraulics issue.

Ricciardo started to pass Norris on the outside at Turn 8. However, at the exit of the corner he distinctly left the track and the stewards determined that he re-joined at an angle that forced Norris off track in order to avoid a collision.

The stewards accepted Ricciardo's explanation that when he was re-joining the track, he had slowed considerably, going down extra gears and locking up the front left tyre. The Australian also stated that the rumble strips in the turn made the car more difficult to control.

However, the stewards considered that the sequence of events constituted re-joining the track unsafely, as he subsequently took the position from Norris.

As a result he was given a 5s time penalty and 2 points on his licence.

Following the incident at Turn 8 with Norris, Kimi Raikkonen managed to pass both the McLaren driver and Ricciardo. The Australian, who by then had regained control of his car then chased Raikkonen from Turn 9 and subsequently passed the Finn.

To make the pass Ricciardo drove off track and then subsequently completed the pass, thereby gaining a lasting advantage.

The stewards reviewed the case to see if it was a continuation of the previous incident. However, Ricciardo clearly had regained control of the car following his incident with Norris and the pass off track was a separate incident.

As a result he was given another 5s time penalty and 1 more point on his licence, bringing his total up to 5 for the 12 month period.

The penalties mean that Gasly is promoted to tenth.