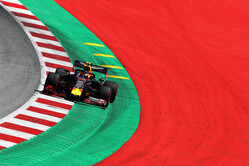 Red Bull team boss, Christian Horner claims that damage incurred on the kerbs in FP1 this morning has cost his team £250,000.

While Renault's Nico Hulkenberg suffered the most damage, ripping off the entire left section of his front wing and necessitating the session to be red flagged, very few of his rivals failed to run over the Red Bull Ring's notorious 'sausage' kerbs at one stage or another, including world champion, Lewis Hamilton.

Both Red Bull drivers had their moments, and speaking after the session team boss, Christian Horner, revealed that three front wings had been damaged over the course of the ninety minutes.

"It’s been a bit of a challenge," he told Sky Sports. "We’ve got through about three front wings so far, probably about £250,000 worth of damage.

"We’re not alone in that," he continued. "There is I’m sure, going to be a debate about the angle of these yellow triangles and the way they are."

"They know they’re there," he said of the kerbs, which he believes 'invite' the drivers to stray. "It needs something either more substantial that is a real deterrent because the invitation is there for the drivers to try to use it."