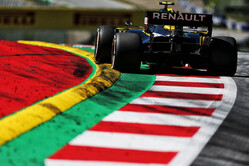 Nico Hulkenberg brought Free Practice 1 to a premature end after hitting a kerb at the exit of Turn 9, which led to damage to his Renault R.S.19. Daniel Ricciardo had put in the eighth best time of that session with a 1min 05.846secs. In Free Practice 2, tricky conditions led to two separate red flags in quick succession, which hampered the team's planned programme.

In Free Practice 1, both drivers used Pirelli's Soft (Red, C4) tyres. The session largely went to plan until the closing stages when Nico ran wide at Turn 9, splitting the left side of his front wing, which was further damaged as he re-joined the track at Turn 10. Free Practice 2 was inconsistent with two red flags halting the session at the midway point.

Nico's car was fitted with a new floor, front wing, nose and bargeboard as a result of the damage sustained in FP1. He began FP2 on Hard (White, C2) tyres with Daniel on Mediums (Yellow, C3). Both cars then changed to Softs with Nico finishing the session on Hards.

Nico Hulkenberg: "It's been a tricky day overall. The car lacked pace and there's a bit of a question mark as to why. While we're slow on the timesheets, I didn't feel totally comfortable at the wheel. We need to investigate what's gone on as it seems a bit odd today. Conditions were tough, especially in the afternoon with high track temperatures and wind in places. A difficult day for us, but we'll work hard tonight to find some solutions for tomorrow."

Daniel Ricciardo: "It was difficult for us out there today, especially with our pace where we struggled to match others around us. As the track improved, we couldn't seem to improve with it. We have a bit of homework to do tonight. Both cars were off the pace, so we'll try and figure it out and find a solution together. The wind did seem to affect a lot of people today. It certainly affected the car and it was tricky out there. We'll look into everything and see what we can improve."

Nick Chester, Chassis Technical Director: "We lacked pace in FP2 today and there's some investigating to do tonight to find out why and find areas we can improve. We'll work with the drivers and find a direction ahead of tomorrow."