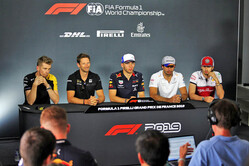 Pierre and Romain, it is your home grand prix. Just describe your emotions coming into this weekend and how busy the build-up has been. Pierre, perhaps we can start with you?
Pierre Gasly: Yeah, I think we are pretty lucky because we didn't have the French Grand Prix for many years; it just came back on the calendar last year, as I started my first full season in F1. I feel pretty lucky to have this chance to have a home race, with the crowd. I think France has always been part of the sport and it's great to have it back and yeah, I'm just really excited for the weekend.

How has the build-up been for you? I think you were playing football last night weren't you?
PG: Yeah, we played for Jules [Bianchi]. We played this soccer game for Jules' association, with all the family, so it was just nice to get all together on the pitch and just to remember him. Then we had another activity with Sébastien Ogier, as a co-pilot, which was pretty intense. Not being at the wheel but like really impressive, so really enjoyable so far.

And Romain how has the build-up been for you?
Romain Grosjean: So far it has been quiet and good. Media duty today is a bit more than normal. But nothing too crazy, son happy to be here enjoying the time, and the south of France weather, which has been good, so hopefully we can have a nice event this weekend.

Thank you. Pierre, if we can come back to you. Tell us about car performance, where Red Bull is at? I think you have a new power unit this weekend. What are your expectations coming into this French Grand Prix?
PG: Yeah, we have a new spec, a third-spec Honda. The last we introduced was more on the reliability side, this one will be focused more on the performance, but we don't expect a massive gain from it. I think the overall performance will be slightly increased, but it's not like it's going to change massively, or we're going to catch the teams ahead of us massively. Let's see what we can do during the weekend. It will give us a bit more in the race. It's not going to be a massive difference in qualifying, but a bit more in the race.

And are you hopeful of being more competitive this weekend than you were two weeks ago in Canada?
PG: Yeah, I think it's a track that probably suits our package a bit more than Canada. You still have many long straights, which for sure are still a bit tricky for us, even though we are making progress. But I think we have new, little bits on the car coming and I think we should be more competitive than we were in Canada.

Thank you. Romain, coming back to you: we're talking car performance, what can we expect for you and Haas this weekend?
RG: We'll see. It's been a bit of a rollercoaster. Generally, I think there's been really good performance but other place we've been struggling a little bit more. So I'm hoping that here we get a good package that's works well, that we get the tyres to work correctly and if that's the case it should be a track that works quite nicely for us, so I'm hoping we're going to give the midfield a hard time and why not even Red Bull and see where we can end up on the weekend.

And do you expect the new asphalt here at Paul Ricard to help tyre performance on your car?
RG: I do not know. I guess we'll find out.

And Romain, a quick word about the track layout. Having been here now last year, how much better prepared do you feel coming into this weekend?
RG: Another one I don't know! I think last year we did some simulator work before coming here and it felt like the starting set-up we had on the car was a good package, so that's good. Obviously we've got the data from last year, which always helps and we're going to focus on fine-tuning and making sure we understand everything. I think the conditions this weekend are going to be quite hot, so we need to make sure that we get the best of everything in those conditions - tyres and cooling and all of that on the car - to not have a bad surprise on Sunday. So the baseline set-up I think is already pretty good and it's now just fine-tuning all the bits and pieces on the car to get the best race performance.

Good luck this weekend. Antonio, we spoke to the other two about their preparations this weekend. I know you had an amazing weekend with the Trofeo Bandini in Brisighella last weekend. Perhaps you could tell us about it and what happened?
Antonio Giovinazzi: Yeah, it was really nice and I'm really proud to receive this important trophy. It was really a good Saturday, a good day, a lot of Italian fans there. So just really proud and also the list of the drivers that won the trophy before is unbelievable, so I'm just really proud, but of course now I have a quite a lot of responsibility to be there. But in the end I think it was really nice to drive on the normal roads - I did 13km. So it was really nice and it was a really good day.

It's your first time here in a Formula 1 car. What are you expecting from the track?
AG: Yeah, I don't have many miles here. I just did two days back in 2017 with an F2 car, so it's quite new for me the track. It's a little bit confusing to be honest, it is difficult. I did some work on the simulator and we'll see tomorrow. The midfield will again be really tight, like every race, but we have a good package and we can be fast enough.

You say you have a good package but it was a difficult weekend for the team in Canada. How confident are you of making a step forward here?
AG: Yeah, the last three races I would say we have been struggling a little bit more compared to the first part of the season, especially compared to the first part of the season. As I say, the midfield is really tight, so small details can make a difference so we are trying to find those details and with a small few tenths you can jump quite a lot of cars. So we are working really hard with the team; I believe in my team, like I think the team is believing in me, and we just need to work hard and find the last details for a good result.

Carlos, coming onto you, I'd like to take you back to Canada as well. That immense stint - 67 laps on one set of tyres - just how hard was that race for you and what lessons have been learnt by you and McLaren?
Carlos Sainz: Yes, it was hard because it was unexpected and when you got through unexpected circumstances, you definitely have to improvise at bit. We didn't want to pit in lap three but unfortunately one of these tear-offs got stuck in my brake duct, which meant I had to pit, remove it and try to finish in the points on a 67-lap stint. It nearly worked: we were five seconds away, of race time, from making it. I still think if we had done a perfect job, we could have still have finished in the points, so the whole weekend was a bit messy since Saturday and we missed out on a good points opportunity. I think we've learned from it. We know what we need to do better for France and... yeah, hopefully we can improve it.

It's an increasingly tight midfield battle. McLaren are now only two points ahead of Renault. How confident are you of taking the fight to Renault this weekend?
CS: I'm confident we can take the fight. It's going to be difficult because I still think teams like Renault and Haas, in qualifying they have a bit more compared to us, so it means that we need to do a better job on Sundays - but it's good fun because it's quite an intense battle, it's super-close, qualifying is incredibly tight and tense in Q2 and Q3. You see drivers always finding the last limit, making small mistakes - and that will give you the opportunity. I'm enjoying it a lot. I think it's a great battle and I still think we need to do a better job on Sundays because Saturdays are a bit more difficult for us.

Nico, thank you for waiting. Your thoughts on this midfield battle.
Nico Hulkenberg: Yeah, there is one, I guess! It's usually pretty tight and yeah, small margins can make a big difference so it's important to get it together, like always. Feel good and strong. Obviously this weekend is important and a big one for us but I think the approach is like every other race. You keep calm and do what you have to do, go through the ranks on Friday and Saturday - but of course we want to have another strong finish here and team result like in Canada.

How much progress has Renault made with its car in the last few weeks?
NH: It seems maybe that way if you look at the results prior to Canada and then Canada. I think it was more that the car has been a victim of circumstances. I think the race pace has always been pretty good but for various reasons often we were compromised on the starting position, coming from behind. It's very difficult to drive through the midfield in the race when there is DRS trains, when cars are difficult to race. So, honestly I feel the car has always been pretty competitive but we just had a lot of issues and also human errors that happened in the first five-six weekends of the year. And we paid that price. For me, Montreal was one of the first weekends where we just stayed clear, made no mistakes and did a solid job and straight away, we got a good reward for it.

(Laurie Vermeersch - F1Only.fr) For Nico Hülkenberg. With the update of the car, and the fact that you had a good result in Canada, Do you think you would be able to offer your first podium for Renault here in France, and the first podium for you too?
NH: I would love to but I think that is still quite some distance away. It is true we have some updates here. But I'm sure other teams are bringing new things as well. I'm curious obviously about how it helps our car. Hopefully we can take a step towards the top three teams and eventually, at some point this year, make their lives harder. Firstly, the main target of the season it to really become clearly fourth team and this upgrade is just part of the journey, part of the process of that year. But, of course, it's an exciting weekend for us and we want to do France proud.

Check out our Thursday gallery from Le Castellet, here.