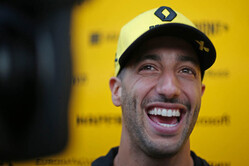 Nico Hulkenberg returned to the points in Canada after a superb Sunday performance led to his seventh-place finish. Now the German is aiming for more at this weekend's French Grand Prix at Circuit Paul Ricard, the team's home race.

What are your thoughts on Circuit Paul Ricard?
Nico Hulkenberg: I've driven a lot of laps there in the past in different machinery, including last year for my first French Grand Prix. The circuit has a nice flow to it and the characteristics are maybe quite similar to the last round in Montreal with long straights, high top-speeds and big braking zones at the end of them. Sector one is quite tight and there was some excitement at Turn 1 on race day last year. Sector two brings a long straight into a sharp chicane and then sector three begins with the very fast run through Signes, which is a lot of fun, and a flowing complex of turns to the start-finish straight.

How special is the team's home Grand Prix?
NH: It's obviously very special for Renault and the staff members. Last year was the first French Grand Prix in 10 years and we had a lot of attention on us, but also a lot of support from the French people. I think it was a big success overall and the whole weekend went well. The atmosphere was great in and around the track, which is always cool to see and motivating. We have a spring in our step and a bit of momentum heading into the team's home Grand Prix. Everyone is carrying that extra level of motivation to do a good job, even more so after a successful race last time out. Hopefully this season we can do even better than last year.

What's the feeling in the camp after Canada?
NH: Hard work always pays off. It was good to see such a strong team effort and a solid result at the end. We've underachieved at previous races, sometimes through technical faults or human error, so I feel we've always had the potential for good results, but we haven't scored points. Finally, we had a smooth and clean weekend to get points on the board. It's hopefully a turning point in our season. We have some upgrades for this race, I'm excited for those, and hopefully they will add performance to the car to help us close the gap to the front teams. We have a good package; the car is performing consistently and I'm feeling optimistic for Paul Ricard.

Daniel Ricciardo sealed his best finish in Renault colours last time out with a sixth-place finish in Canada, all after qualifying a spectacular fourth on the grid. The Australian is growing in confidence in the Renault R.S.19 as it all begins to click into place.

How challenging is Circuit Paul Ricard?
Daniel Ricciardo: We're coming into Paul Ricard on the back of two non-permanent race tracks in Monaco and Montreal where the walls are tight and there's little room for error. The risks are a lot lower for France as it's a very open circuit. It's maybe a bit tame in comparison, but nevertheless, last year's race was pretty cool and thrilling so it makes up for it! There are some long, technical corners to get through, which are a challenge. There are plenty of overtaking opportunities around the track to send one, so we'll be aiming to be in a position to make the most of any chances.

What's the post-Canada mood?
DR: It was great to see the positivity on everyone's faces after the race. We entered the season with a lot of expectation on us. I think we're really starting to come up and show our true pace. I'm glad the team enjoyed a strong weekend as it's been stressful at times, but we kept working and now I'm optimistic this is the start of heading on the right path. There's clearly a lot more work to do to catch up to our expectations, but fighting with the front three for a part of the Canada race was a lot of fun.

Are you excited for your first home Grand Prix with the team?
DR: I'm really looking forward to embracing the French atmosphere and hopefully doing the team proud. I know it's a significant race for them and how much it means to everyone involved. The target for France has to be repeating the form of Canada. The team had good pace at Paul Ricard last year, so there's certainly a good feeling there. We have some upgrades, which should mean the start of a trend of our true pace. It's coming along well and, as the car gets better, I'm also growing in confidence and I'll keep getting better with it.