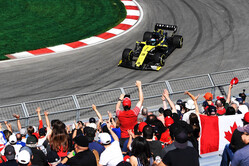 Daniel edged Nico by just 0.152secs in Free Practice 2 under hot and dry conditions on the Île Notre-Dame.

Friday focused on finding the best downforce balance at the power-sensitive circuit as well as striking the right suspension and ride set-up for its notoriously high kerbs.

Both drivers commented on the track being green and dusty in Free Practice 1. Throughout the entire morning session, both drivers ran Pirelli's Medium (yellow) C4 tyres with a programme focused towards striking the right balance at Montréal's power-sensitive track. The early running in Free Practice 2 saw Nico begin on Hard (white) C3 tyres with Daniel continuing on Mediums. Both drivers then completed short runs on Soft (red) C5 tyres, before focusing on high-fuel evaluations.

Nico Hulkenberg: "I'm reasonably happy with today. It's always fun around here and I really like the track. It was a decent Friday, the car feels good, but we'll have a look at a few things and make some tweaks. Our short run pace was fine, it's tight in the midfield but we ran quite early in the session and maybe others had the advantage of the track improving. Our long runs were also OK, but graining on the Soft is something to look out for over the weekend."

Daniel Ricciardo: "Today's been pretty good and we achieved a lot of running. We seem to be close to where we're aiming but still want a bit more. We looked at the pace of a few others and know that there is still a bit of time to be found. Both my long runs had quite a different balance so we'll work out which one works better and go from there. We went through quite a few items and that was positive for us. All in all, a good day where we put in a lot of laps around a really fun race track; I like it here!"

Nick Chester, Chassis Technical Director: "It was a reasonable day for us. We had a decent programme of items to evaluate, which we worked through quite well. We conducted tyre evaluations, which proved interesting as the gaps between the compounds were a little different to what we were expecting. The track was very dusty to start the day and that meant we couldn't learn that much in FP1, but it continued to improve over the course of the afternoon. FP2 was more representative and we enjoyed some solid running there across both low and high fuel. It's been a straightforward Friday with no real problems, but as ever, the midfield is super tight and we have a bit more to find tomorrow."