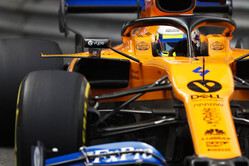 McLaren has revealed that high brake temperatures were the cause of Lando Norris' fiery exit from the Canadian Grand Prix.

The team first became aware of an issue when the Briton missed the chicane at Turns 3/4, the youngster subsequently stopping at the pit entrance with flames licking from the rear of the car.

"We had high temperatures in the brakes," a team spokesman told Motorsport.com. "That caused a component failure, which basically created a localised fire.

"Because it was in an area where there isn't any air flow, it didn't get extinguished," they continued, "and basically we exceeded the temperatures that carbon can withstand, and effectively that led to the suspension giving way.

"We're clear about what happened, so it's not an ongoing issue," they insisted, "it was a singular event."

The team was keen to make clear that Norris' issue was unrelated to the brake temperature issue that caused teammate Carlos Sainz to make an early stop.

"Carlos had brake overheating caused by a tear-off, so it wasn't related at all," they said. "We removed that and it returned to normal."