There must be an end to it, says Steiner 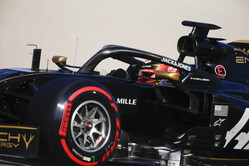 In a midfield as tight and volatile as this year's any mistake or weakness is unlikely to go unpunished.

And so, despite having what many regard as the fourth best package out there, Haas team boss Guenther Steiner despairs at the fact his team is currently 8th in the standings, albeit just 17 points behind fourth-placed McLaren.

Along with the 'usual' strategic and driver errors, the American outfit has been hit hard by its failure to work its tyres, like many of its rivals regretting the switch to a thinner tread this season.

The team's rollercoaster season was put in perspective in Canada last week, when Kevin Magnussen crashed at the end of Q2, the incident meaning that teammate Romain Grosjean, who was running just behind, failed to make the cut.

In the race, the Frenchman's race was effectively over on the first lap when he was the innocent victim of the three-way incident that also wrecked Alexander Albon's afternoon. Meanwhile, Steiner eventually had to take the mic and cry "enough!" as Magnussen criticised a car his mechanics had spent all night building.

"There must be an end to it," says Steiner, according to the official F1 website. "What can you do? There's a point where you cannot get more annoyed.

Like many, Steiner puts the poor performance of his team's 2019 contender down to the tyres.

"For us, the tyres are so inconsistent," he says, "and I think it's the same for others. One car is very quick at one race and at the next race he is nowhere.

"When you're on a high, you think you've figured it out," he continues, "and then the next race you're back to reality... it's such a rollercoaster.

"If you look at Monte Carlo, in qualifying we were not even two-tenths off a Ferrari. In Canada, how many seconds were we off it? It can't only be the car, it's the tyres. Ferrari didn't have a bad car in Monte Carlo. Maybe they didn't get the tyres to work there and we did.

"It's very sporadic what is happening. The general level of confidence is in theory we should be ok but can I tell you with knowledge we are ok? No. Because we don't know when they work and when they don't work. A lot of people are asking to go back to last year's tread of tyres because they seem to be more consistent. It cannot only be us."