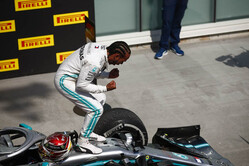 Ferrari driver Sebastian Vettel finished first on the track, but Mercedes driver Lewis Hamilton won the race after the German was given a five-second time penalty in Canada. Ferrari and Mercedes occupied the top four places, starting the race on the medium tyres and making a single stop for the hard compound: a strategy that we had predicted as the fastest.

This was one of the hottest Canadian races in recent history, with more than 50 degrees of track temperature and 30 degrees ambient as the race started.

Vettel led from pole and stopped after 26 laps, two before Hamilton, with the pair fighting hard throughout most of the race, separated just by a couple of seconds. Their duel was only decided by an 'unsafe re-entry' penalty for Vettel from the race stewards.

Red Bull's Max Verstappen ran an alternative strategy after starting from ninth on the grid, with a long initial stint on the hard tyre and a final stint on the medium. The same strategy was adopted by Racing Point's Lance Stroll, who finished ninth.

The majority of drivers stopped only once despite the high temperatures, with a notable exception being Mercedes driver Valtteri Bottas, who took the extra championship point for fastest lap, thanks to a short final run on the soft tyre.

Renault claimed a double points finish for the first time this year, with a soft-hard strategy. There were four different strategies in total within the top six.

Mario Isola: "This was a fantastic fight between two champions with nine titles between them throughout the whole race: held in extremely hot conditions, with 52 degrees track temperature at the start. This obviously affected the soft compound most, while the thermal degradation on the medium was lower than expected. In general, the tyres stood up extremely well to the challenge, ensuring that nearly everybody stopped only once. Medium to hard was clearly the best strategy under these circumstances. The weather conditions also meant that drivers completing a long first stint on the hard were able to use this compound to good effect, with both Max Verstappen and Lance Stroll scoring valuable points after making their way up through the field."