Magnussen to start from pitlane 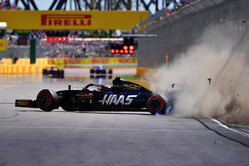 Despite qualifying tenth, Kevin Magnussen will start the Canadian GP from the pitlane following Q2 crash.

In the final moments of Q2, the Dane ran wide in the final chicane, clouting the infamous Wall of Champions and then spearing across the track to hit the pitlane wall.

While the chequered flag had already been waved to signal the end of Q2, a number of drivers, not least teammate Romain Grosjean, who was running right behind the Dane, and Max Verstappen, were on their final flying laps which had to be aborted.

Ironically, Magnussen thereby made the cut having qualified tenth, though he was unable to play any further part in proceedings.

While it was anticipated that the Dane would need a new gearbox, which in itself would mean a grid penalty, the team opted for a complete chassis change, thereby meaning a pitlane start.

There's no point to try to start somewhere in the back end with the C5 tyre," he added. "The best way is to change the chassis. The quickest and safest way is to do that. And start from pitlane."

"I just had a snap and brushed the wall," explained Magnussen. "It wasn't even that hard, but I caught the wall with the rim, so it just blew the rim and took the tyre off the rim and chucked me over to the other side.

"I didn't expect to spin like that," he admitted, "but because the outside of the rim had blown off it just turned me to the other side. I didn't think it would be any problem, because when I had the snap I thought 'OK, I might hit the wall but it's going to be fine', but then I hit it only slightly, right on the rim and it flew. It was going well, but bad luck.

"That's the thing when you make a mistake like this, it means your guys have an all-nighter," he added. "They don't get any sleep at all. I feel really bad for them also, not only because it cost a good result in qualifying but they have to work all night. That sucks big time."

Currently 8th in the standings, Magnussen hasn't given up on adding further points to his tally in the race.

"There's loads of chance," he grinned, "sometimes you have a crazy race and you can make it to the top. Anything can happen."

Combined with Carlos Sainz' grid penalty, this means that Max Verstappen will now start from eighth, with a free choice of tyres.