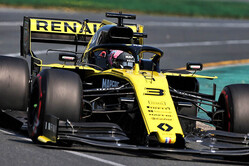 Like that reminder in your calendar that you totally forgot about, a late flurry of excitement in the final couple of laps last Sunday woke the majority of race fans from their slumber.

As Charles Leclerc appeared to catch Valtteri Bottas napping following the withdrawal of the VSC, Daniel Ricciardo bit the bullet and mounted an attack on the ailing McLaren of Lando Norris.

However, clearly caught up in the moment, the Australian went full Dick Dastardly, forcing the McLaren driver off track and then going cross country in his bid to re-pass Kimi Raikkonen who had overtaken both of them in the midst of it all.

According to the stewards, Ricciardo started to pass Norris on the outside at Turn 8. However, at the exit of the corner he "distinctly left the track" and the stewards determined that he "re-joined at an angle that forced Norris off track in order to avoid a collision".

While the stewards accepted Ricciardo's explanation that when he was re-joining the track, had slowed considerably, going down extra gears and locking up the front left tyre and the rumble strips in the turn made the car more difficult to control, they considered that the "sequence of events constituted re-joining the track unsafely, as he subsequently took the position from Norris".

In terms of the move on Raikkonen, following the incident in Turn 8 with Norris, the Finn managed to pass both the McLaren driver and Ricciardo. The Australian, who by then had regained control of his car then chased Raikkonen from Turn 9 and subsequently passed the Finn.

"Raikkonen defended his position on the straight moving slightly to the right,2 said the stewards. "However, he never put any part of his car off the track and he did not make any move to the right while any part of Ricciardo's car was alongside, and did not crowd the Renault driver off the track.

On the other hand, "to make the pass Ricciardo drove off track and then subsequently completed the pass, thereby gaining a lasting advantage", they deemed.

The stewards reviewed the case to see if it was a continuation of the previous incident. However, Ricciardo clearly had regained control of the car following his incident with Norris and the pass off track was a separate incident.

Not so, insists Dick... sorry, Daniel.

"I feel two was harsh," he told reporters in Spielberg. "I get one, and get why they needed to do one because otherwise it is like, he is off track and everyone is going to complain, what are the rules for?

"Whether I feel it enlightened the race or not, I think the one was slightly inevitable if I am really honest," he continued. "But two... I just thought to drop me out of the points was too harsh. With the one I would have dropped already to tenth, so give me one point for trying!

"I've nothing against Gasly at all," he insisted, "but he wasn't in our battle at all, and he kind of steals the point. I didn't think that justified it. But it is all good, I got over it pretty quickly."

The Australian, known for his keen sense of humour, also believes the track played a part.

"The track doesn't help," he smiled. "Put gravel there, put something there and it automatically stops us... and it does stop us.

"I still think I would try if there was gravel there," he added, "but maybe it does already create the penalty for us, without them being handed out after the race. That is why I am not really a fan of the big open tracks."