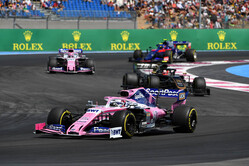 Even though effectively caught 'bang to rights', as was Daniel Ricciardo later in the race, Sergio Perez disputes the 5s time penalty handed to him after he went wide on the opening lap, missing Turns 4 and then rejoining the track at Turn 5.

"I locked up, I went off, and I just did what I was supposed to do," said the Mexican, "to go around the bollard, to make sure that you respect track limits. But I still got the penalty!

"I don't know what is their view," he said of the stewards, "because it's been very clear the rule, you have to go around the bollard, and as long as you are behind the bollard, you are complying with the rules."

However, the stewards deemed that although Perez followed the procedure in the race director's notes, he clearly gained positions when he re-joined the track at Turn 5 and retained this advantage. Indeed, on-board footage from Kevin Magnussen's car shows the Racing Point going off and rejoining in front of the Haas.

The stewards reviewed whether Perez was forced off, and determined that this was not the case. "Gaining an advantage is a breach of the Regulations and of the Race Director's instructions (Point 10.6)," they ruled, "which states that even if you follow the procedure you may only re-join the track without gaining a lasting advantage".

"It's hard for me to comment whether or not I gained an advantage," said Perez. "All I can say is that I stuck to the rule, and if that is quicker, that's not my problem. It's how it is. We should make it slower, because on Lap 1, you're just trying to go around it. To judge where you are… I ended up behind Hulkenberg, it's where I started, so for me it was very hard to see if I gained or not an advantage.

"We had the possibility and the pace to be in the points," he said. "But once you had that, you are totally out of the race, no matter what you do, you're never going to claw them back. They ruined our race. I just have to review the incident again, but from my point of view, I just followed the rules, did what I was meant to do."