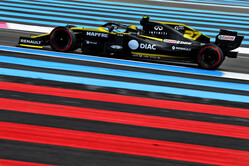 Today's practice focused on evaluating a number of upgrades to the Renault R.S.19 and Renault E-Tech 19 power unit. The team ran several aerodynamic upgrades today including tighter bodywork. On the power unit, Daniel used a new Spec B ICE.

In Free Practice 1, both drivers used Pirelli's Soft (Red, C4) tyres. Nico had a relatively smooth session, while Daniel missed a small part of his programme due to a precautionary check to the floor after running wide at T11.

Track temperatures peaked at 52°C, making grip around the 5.842km Le Castellet circuit a particular challenge. Allied to the very high air and track temperatures plus strong gusts of wind, this is a tricky track to get right.

Nico Hulkenberg: "It was a solid Friday in the car, we worked through what we needed to and tested out the new parts in the afternoon. It felt positive and encouraging. Conditions were very hot, which meant it was challenging at the wheel. All in all, it was a decent day where we collected a lot of data, especially on the long runs, which were good. We have more work to do on the low fuel pace. This circuit is quite demanding with different corner variations throughout. As ever for practice, we have some things to look at to find that sweet spot."

Daniel Ricciardo: "Today was positive, although maybe the timesheets don't reflect how the car actually felt. Across all our runs today, the car seemed good. Our Soft tyre run in qualifying trim was slightly tricky, especially with high track temperatures and maybe we missed out a little there. It didn't feel that far off, and I'm certainly optimistic for tomorrow. The upgrades seemed positive and we have some data to go through to find further improvements."

Nick Chester, Chassis Technical Director: "It's been an interesting first day of running. This morning was productive, but we seemed to lose some pace in the afternoon. While we looked fairly competitive on the longer runs, we have some pace to find on the shorter ones. The deltas between the tyre compounds isn't quite as expected here - there's not much between them. We need to look through the data we gathered to evaluate the new upgrades to make sure we get everything to work together tomorrow."