Verstappen and Bottas crash out in FP2 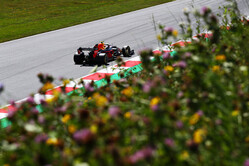 Much of the excitement earlier was provided by the circuit's notorious 'sausage' kerbs which were responsible for damage to nine different front wings.

Speaking after the session, Christian Horner revealed that his team, which saw three wings damaged, was out of pocket by £250,000. Thankfully, he stopped short of calling for a Crowdfunding venture.

Inevitably, Lewis Hamilton topped the timesheets, but, interestingly, while the world champion was on the softs, Sebastian Vettel was only 0.144s slower on the mediums. Indeed, both Ferraris remained on the yellow-banded rubber for the entire session.

Carlos Sainz was best of the rest, but the Spaniard will start from the back of the grid on Sunday following a complete engine change.

After last weekend's 'worst weekend ever', Guenther Steiner will be happy to see both of his driver in the top ten earlier.

The lights go green, and the Haas duo lead the way, followed by Albon. Each is on a different compound.

Grosjean posts 7.402, with teammate Magnussen crossing the line at 7.321 moments later. Interestingly, the Dane is on the hards and the Frenchman on the mediums. Albon, on softs, goes third.

The Thai subsequently improves to 7.019 to go top. Due to start from the back of the grid on Sunday, Albon says he intends using the practice sessions mainly for testing purposes.

A 6.613 sees Grosjean go quickest, as Norris goes second, ahead of Norris, Magnussen and Albon.

That's the first wing of this session, as Stroll runs wide in the final corner. Thankfully, his father has deep pockets.

Moments later, Giovinazzi shed a minor piece of carbon-fibre as he duplicates Stroll's off.

"There's a tailwind at the exit of three," reports Raikkonen, said turn being tricky enough as it is.

Vettel goes fourth with a 6.473, the German on the hards. Moments later, teammate Leclerc, on the mediums, goes quickest with a 5.558.

Hulkenberg goes 17th (8.138), the German having required a new floor, nose and bargeboard following his FP1 encounter with the sausage kerbs.

Still on the hards, Vettel improves to second with a 5.871, just 0.313s off his teammate's best on mediums.

Gasly explores the famous hills where Julie Andrews sung of a lonely goatherd as he gets things totally wrong at T4.

A 5.147 sees Bottas go top, as the cameras pick up on a worrying oscillation on Hulkenberg's rear wing.

"Something is wrong, mechanically, no grip anywhere," reports Kvyat.

Approaching the half hour, Norris is the first driver to fit the softs as the qualifying sims look set to begin.

As Verstappen gets a new front wing it is unclear if the old one was damaged or the team is running back-to-back tests.

A combination of mistakes and traffic means that we've yet to see an improvement from Norris on the softs. Meanwhile, more and more drivers are switching to the red-banded rubber.

Indeed, Grosjean is the first to deliver a qualifying-sim flying lap, the Haas driver going fourth with a 5.701.

Oh dear. The session is red-flagged after Verstappen goes off at the final corner, going into the barriers backwards. As the Dutchman climbs from the car, the rear of which is badly damaged.

Replay shows he simply lost the back end. Indeed, his radio message to the team, which consists only of bleeps, confirms as much.

Vettel had just gone quickest in S1, when the session was stopped.

The session resumes and Hamilton is among the first out. However, as we ride a somewhat scrappy on-board lap with the Briton, the cameras cut to Bottas who has crashed at T6.

Replay shows the Finn lose the rear, and despite his best efforts spears into the barriers opposite.

As he climbs from his car, which has incurred significant damage at the front, both front wheels hanging on by their tethers, Toto Wolff looks on impassively.

"Is he OK," asks a concerned Vettel.

The session resumes again, with just over 35 minutes remaining.

The Ferrari pair are among the first to head out.

Vettel goes quickest in S1, while Leclerc posts a PB. Vettel maintains his pace, while his teammate continues to run just a little too deep.

Vettel is off at the final corner, the German losing it on turn-in. Thankfully he holds it all together and is able to continue. Replay suggests that the wind is playing a part.

"They're finished," says the four-time world champion when asked about his tyres.

Christian Horner confirms that the wind played a factor in Verstappen's off, while admitting that the Dutchman getting up on the kerbs didn't help.

The qualifying sims completed, despite the best efforts of Verstappen, Bottas and Vettel, attention switches to race sims.

Despite the woes of his rivals, not least his teammate, Hamilton continues to push the envelope.

"I lost the rear in Turn 5," Bottas tells Sky Italia. "I made a correction but it wasn't enough." He confirms that the wind played a part. "This afternoon is a bit more windy," he says, "and this track is a bit more penalising of any mistake so..."

Gasly is told that his tyres are looking good as Sainz goes rallying at T5.

"What's he doing," asks Leclerc as Giovinazzi fails to see the Ferrari and almost hits him. Both subsequently pit.

Hulkenberg reports a "lot of understeer".

"Do your thing, let him go," Gasly is told as he goes head-to-head with Perez.

"Something's wrong with the engine," insists Leclerc, though the team can see no issue.

Due to the red flags and the failure of a number of drivers to complete their qualifying sims, the times are somewhat unrepresentative, nonetheless, Leclerc is quickest, ahead of Bottas, Gasly, Hamilton, Sainz, Grosjean, Raikkonen, Vettel, Verstappen and Norris.

Having lost £250,000 on those front wings in FP1, one can only guess what Verstappen's crash in this session has cost Red Bull.