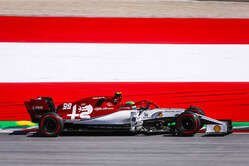 Alfa Romeo has been fined €5,000 after it was discovered that the fuel temperature on Giovinazzi's car was too low

Summoned by the stewards shortly after FP2, the Spielberg stewards determined that the temperature of the fuel intended for immediate use in Antonio Giovinazzi's car was more than thirteen degrees centigrade below the ambient temperature recorded by the FIA appointed weather service provider one hour before the second practice session.

Article 6.5.2 of the 2019 technical regulations dictates that no fuel intended for immediate use in a car may be more than ten degrees centigrade below the ambient temperature.

In this case the ambient temperature was published to be 30 degrees centigrade and the temperature of the fuel was 17 degrees or below.

The Alfa Romeo team acknowledged that the temperature was below that required under the regulations, and given that the infringement occurred during FP2 a fine of €5,000 was imposed.