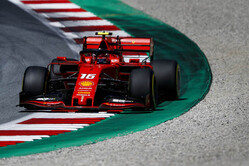 Following the chaos that was FP2, things were a little more subdued earlier as the drivers finally got to do their qualifying sims.

That said, clearly with an eye on yesterday's events, one couldn't help but feel that perhaps drivers were being a little over cautious earlier, and it was only in the final moments, as they begin to push that little bit harder, that we saw a couple incur damage as they ran wide over the kerbs.

On the evidence thus far, Mercedes appears to have a fight on its hand, for as Ferrari continues to try and get the very best from its updates, following their initial disappointment, both Leclerc and Vettel seem to be up for the fight.

Of course, Mercedes is always up for the fight, and Hamilton gave Leclerc a run for his money earlier, while neither Bottas, nor his car, showed any after effects following yesterday's crash.

Not so Verstappen, who, despite finishing fifth, 0.459s off the pace, was clearly unhappy with his car.

The McLarens look strong here, though Sainz will start from the back of the grid after changing his engine.

The Toro Rosso pair looked good also, but like Sainz, Albon will start from the back after he too had an engine change.

Hulkenberg and Magnussen will both take 5-place hits after changing their ICE and gearboxes respectively.

Not wanting to suggest any bias, but following the tedium of Le Castellet, F1 really needs to do produce something special this weekend, and what could be better than a serious challenge from Ferrari, especially after the doom and gloom messages from Mattia Binotto in recent weeks.

The lights go green, and the Alfa duo lead the way, followed by Stroll and Kubica.

Kubica posts the first time of the afternoon, a 7.579, but this is instantly beaten by Raikkonen and then Giovinazzi (5.027).

As more drivers head out, all are on the soft other than Stroll who is on mediums.

Leclerc heads out on the mediums, as do Vettel and Perez.

As Hamilton begins his first flying lap, he has Leclerc running right behind. The Briton posts 5.110, while the Ferrari driver goes top with a 4.304.

Leclerc says he doesn't know how he got that time (!!!) but was "way too close to Hamilton".

The Verstappen stand roars as 'the man' goes third with a 4.565. Moments later the Dutchman is demoted when Hamilton posts 4.560.

Bottas, like his teammate, is on mediums, and posts 4.738 to go seventh.

Gasly complains that he lost power on his second lap.

Going quickest in S2, Verstappen goes second with a 4.339, the Red Bull driver on the softs.

With 5 minutes remaining, the drop zone comprises the Williams pair along with Stroll, Kvyat and Raikkonen, with Albon, Perez and the Renault pair hovering.

"Don't hang about," Hamilton is told, "just get back." The Briton is currently fifth and his teammate seventh.

Magnussen improves to 8th with a 4.738 as Giovinazzi, Norris and Gasly all improve, dropping Hamilton to 8th and Bottas to 12th.

With just under two minutes remaining, both Mercedes drivers head out again. A rare sight.

Hulkenberg, currently 11th, has incurred some endplate damage on the kerbs.

Kvyat has to take a major detour as he comes across a queue of cars in the final corner. The Russian isn't happy, and rightly so.

Kvyat will rightly feel aggrieved, as the stewards announce that they are to investigate. They have also noted the Hamilton/Raikkonen incident at the start of the session.

Hamilton is first out for Q2, followed by Verstappen and Bottas. All three are on mediums.

Leclerc is next out, the Ferrari driver now on the softs, as is his teammate.

The crowd goes wild as Verstappen goes quicker than the two Mercedes, the Dutchman posting 3.835, while Bottas posts 3.936.

A 4.759 sees Grosjean go sixth, the Frenchman subsequently told to pit as he has front wing damage.

Gasly goes sixth (4.167), ahead of Norris, Raikkonen, Giovinazzi and Hulkenberg.

Magnussen leapfrogs Hulkenberg with a 4.466, as Hamilton improves to fourth with a 3.896.

Hamilton is looking for someone to get a tow from, but there's nobody there. "You need to help me guy," he pleads.

"Are there any cars out here, am I on my own," he asks in a follow up. He subsequently gets a two from Grosjean, as Hamilton reveals "we are not quick on the straights".

Lots of activity in the Ferrari garage, where a mechanics are swarming over Vettel's car. It's not clear what the issue might be. Even the FIA has a couple of scrutineers present. And all the while German sits patiently in his car, as Mattia Binotto watches from the pit-wall.

The lights go green for Q3, but it is a couple of minutes before a car emerges, it's Raikkonen, followed by his Alfa teammate.