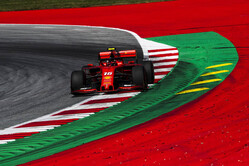 Yesterday's chaotic second session, which saw red flags after the crashes involving Verstappen and the Bottas, meant that a number of drivers never got to do their qualifying sims, which means the pecking order remains something of a mystery.

Leclerc topped the timesheets, but as we saw in FP1, Vettel and his Ferrari teammate had almost as good a pace on the mediums as the Mercedes pair on the softs.

Grosjean was 'best of the rest', but as we say, those two red flags mean that we have to take the FP2 results with a pinch of salt.

What we do know is that Albon and Sainz will start from the back of the grid after taking on new power units, while Hulkenberg will drop five places after taking a new ICE.

Heading into the final practice session, what we do know is that the two issues that appeared to cause all the problems yesterday - aside from driver over enthusiasm - the kerbs and the wind, remain, so there is every chance we will witness more incidents, and not just over the next hour.

The lights go green and Giovinazzi leads the way.

Meanwhile, it is revealed that Albon has had his second engine change of the weekend. Already destined to start from the back, this a tactical move by Toro Rosso as it means the Faenza team can keep the MGU-H and turbo from the power unit he used yesterday in the pool of components.

And talking of Albon, he follows Giovinazzi out on to the track, ahead of Magnussen.

Ricciardo, Grosjean, Hulkenberg and Raikkonen head out, all on the mediums, before heading back to the pits.

As the track falls silent, Ricciardo is told that it will be nine minutes until his next run.

Following the problems during FP2 we assumed that this morning would be busy. However, as the drivers remain in the garages it appears the teams are waiting until the conditions are a little more similar to qualifying and tomorrow.

Following several minutes of nothing, the McLaren pair head out, followed by Kvyat. The Russian on mediums, as is Norris, while Sainz is on softs.

Seemingly caught out by a crosswind at T3, Ricciardo is an early lock-up.

Albon goes top with a 6.175, ahead of Sainz, Ricciardo, Hulkenberg and Kvyat.

Bottas is the first of the big guns to emerge, the Finn shod with softs.

A PB in S1 is followed by the quickest S2 of all. Another purple in S3 sees the Mercedes driver stop the clock at 5.510.

Leclerc and Vettel head out, both on the softs.

Sainz complains of lots of smoke from his brakes but is told that this is not unusual as they are new.

Leclerc posts a 4.826 having been quickest in the final two sectors, while Vettel, quickest in S1, goes second with a 5.093.

"Really low on power," reports Gasly as he slowly makes his way back to the pits.

As Gasly is pushed back into his garage, teammate Verstappen heads out.

As Verstappen begins his flying lap, Hamilton heads down the pitlane.

Quickest in all three sectors, Leclerc raises the bar with a 4.275, as Verstappen posts 5.241 to go fourth.

A mistake in T3 sees Hamilton run wide and subsequently abort the lap.

PBs in all three sectors see Verstappen leapfrog Hamilton and re-take fourth with a 4.670.

A big lock-up for Grosjean at T3 which sees the Frenchman run wide as Hamilton gets a ringside view.

As Gasly's car is stripped down, Norris goes sixth (5.443), on the mediums, ahead of Albon, Perez, Magnussen and Kvyat.

After 31 minutes, Stroll is the only driver yet to appear. That said, the Canadian heads down the pitlane, subsequently posting a 6.457 on the mediums to go 16th.

A big wobble in T1 for Raikkonen, the Iceman pushing hard as ever.

Sainz posts PBs in all three sectors to go sixth, 0.944s down on Leclerc.

Gasly heads out again, reporting that the power "still feels low again out of Turn 3".

Next time around Bottas goes quickest in the two final sectors, crossing the line at 4.221 to go top by 0.054.

PBs in all three sectors for Vettel but he remains third, as Leclerc goes top with a 4.120 after posting purples in the final two sectors.

Order is restored as Gasly goes sixth with a 5.152, leaving Sainz as best of the rest.

Despite a slow opening sector, Leclerc goes quickest in S2. Another 'poor' final sector yet he is the first man to break the 1:03 barrier, crossing the line at 3.987.

Haas reports that Magnussen's session is over though it is not clear why.

"The changes we made are not good," reports Verstappen as he aborts his lap. His next lap is equally poor. "I've got lag," he says.

Giovinazzi goes ninth, ahead of Kvyat, Albon and Hulkenberg.

Gasly remains seventh, behind Norris, as the Frenchman's woes continue.

Stroll reports damage to his front win. Hmm... wonder how that happened.

Moments later, Giovinazzi also reports front wing damage. With just two minutes remaining, could it be that drivers are pushing that little bit harder. The Italian went wide in T1 while Stroll went 'walkies' in T10.