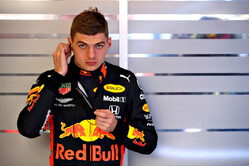 In recent days there has been talk of a performance clause in Max Verstappen's contract which would allow the Dutchman to leave Red Bull at the end of the season.

Accepted as one of the hottest properties in F1, and a future world champion, this has led to the youngster being linked with a number of teams, most notably Mercedes and Ferrari.

On Friday, confirming that there is such a clause, Helmut Marko told Auto, Motor und Sport that he feared Mercedes was lining up a bid for Verstappen.

Not so, says Toto Wolff.

"I haven't spoken to Max," said the Austrian, when asked about Marko's comments. "I'd like to continue like we've always done in the past, first to evaluate our current line up and discuss with the drivers what their views are before entering into a proper discussion with anybody else."

Besides which, Wolff is busy trying to find a way for Esteban Ocon to rejoin the F1 grids next season.

Asked about details of the clause at the post-qualifying press conference, Verstappen said: "What do you think... of course not! Why would I? I know, but I don't care."

"There's just a lot of speculation and it's a long way wide of the mark," Christian Horner told Sky Sports.