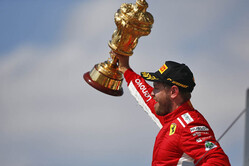 Sunday sees the seventieth running of the British Grand Prix. This and the race in Italy are the only two events to have featured in every year of the World Championship. In fact, one could say that, if Formula 1 has a home, it's probably Silverstone. It was here, on 13 May 1950, on the perimeter roads of the former Royal Air Force airfield, that the world championship was born. That first historic race saw a dominant Alfa Romeo fill the first three places, with the "three Fs", Giuseppe Farina, Juan Manuel Fangio and Luigi Fagioli, watched by King George VI.

Ferrari did not take part in that race, making its debut at the next round in Monaco, but the British track still played a key role in the history of the Prancing Horse, as the following year, it was here that it took its first F1 win on 14 July, courtesy of Jose Froilan Gonzalez driving a 375 F1.

Over the years, the British GP has been held at three circuits. This year, Silverstone hosts the race for the 53rd time, while it has also been held at Aintree five times and on the climbs and drops of Brands Hatch on twelve occasions. Ferrari has won the British GP 17 times, a hit rate of almost one in four, as well as taking 15 pole positions and a total of 55 podium finishes.

The Italian national anthem was heard once again on British soil in 1976, when Niki Lauda won in the 312 T2 at Brands Hatch, when the Austrian also took pole and set the race fastest lap. Two years later, it was the turn of the Argentine Carlos Reutemann and the 312 T3. 1990 was the final year for the super-fast Silverstone layout. Nigel Mansell took pole at an average speed of 255 km/h in the F1-90, while the win went to his team-mate Alain Prost, with the track undergoing drastic modifications to slow the cars down as from the following year.

The first Ferrari driver to win at the new Silverstone was Michael Schumacher, despite pitting on the very last lap for a 10 second stop-go penalty. The following year, the German had a serious accident, the worst of his racing career, when he went off at Stowe corner and broke his right leg, which meant he missed most of the rest of the season. Schumacher won again here in 2002 and 2004, with his team-mate Rubens Barrichello victorious in 2003. In 2007, Kimi Raikkonen won for the Scuderia. The next win for the Maranello marque came in 2011, when the track had undergone another major layout change, now measuring 5.891 kilometres. Fernando Alonso made the best of the damp conditions in the early stages, before pulling away from the field in the F150 Italia. Last year, Scuderia Ferrari took its 17th win in this race, courtesy of Sebastian Vettel, with team-mate Kimi Raikkonen joining him on the podium in third spot.

Sebastian Vettel: "Racing at Silverstone is something special for all the drivers because it's such a cool track. There are a lot of fast sections. It is also very technical, especially in the first part of the track with the new corners.

"To be honest, I still prefer the old parts with the fast flowing turns. There is one of the most epic corner sequences in Formula 1 on this circuit, with Maggotts, Becketts and Chapel leading onto the Hangar Straight. I think every driver enjoys that part and I certainly do.

"We won there last year and it is also the place where Ferrari took its first race win in Formula 1 a long way back, so there is plenty of history there for all of us at Ferrari."

Charles Leclerc: "I am looking forward to being back at Silverstone. It's a track that I really like driving on.

"The circuit is well-known for its fast corners which always makes it fun for all the drivers, especially in these cars which have so much downforce.

"The atmosphere at the Grand Prix is also fantastic and there are a lot of people supporting us, which is great. Being part of a race as iconic as this one is always something special and we will fight to make it a good one."

Mattia Binotto Team Principal: "Silverstone is one of the toughest tracks of the season, providing a real test of a car's set-up and balance. Tyres also come under a lot of strain here and the amount they wear plays a key role in how your race pans out.

"We do not expect Silverstone to suit our car particularly well, but at every race, we have seen that the balance of power can change, often unexpectedly. For the British Grand Prix we are bringing a further small aerodynamic modification as we continue to push hard on the development of our car.

"The weekend will also be an opportunity to increase our understanding of the recent work we did, which has seen us close the gap to our competitors on specific types of track."