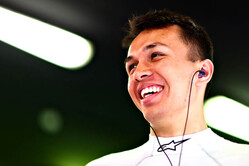 Alexander Albon: "There's not so far to travel for this next race, as I am based in the UK. We had a tough time at the last two rounds and in Austria, we tackled practice in a slightly different way, as we knew I'd be starting from the back of the grid because of the PU change penalties. We tried to understand the car a bit better as it had not worked the way we wanted in France. In Austria, we tried to unlock it's potential, but we had similar issues to Paul Ricard, even if to a lesser extent. Coming to the British GP, without penalties on the plan we will be starting the race from the actual qualifying position and, after having analysed lots of data from the last two races, we hope we will be able to battle in the tight midfield successfully.

"Silverstone is actually one of the tracks I've driven on the least. I think I've only raced there four times. I really like it and I have good memories of winning the Feature Race there last year in F2. Actually, I almost forgot I won the GP3 race there, starting from pole. I think every driver loves Silverstone because even if I've not actually driven there in an F1 car yet, I'm sure it's the sort of track where these fantastic cars really come to life, making use of all that downforce through the high-speed stuff. Maggotts and Becketts are really cool and I'm sure in an F1 car it's going to be like a roller coaster. You can get into a good rhythm there as all the corners flow into one another - really good fun. It's a power sensitive track, where downforce is very important and we will have to wait and see how Friday goes before getting an idea of how we might get on this weekend.

"I am very much looking forward to it. The track is only a 25-minute drive from my house in Milton Keynes. Although, actually I will stay in the team hotel, as the traffic should be much easier from there. All my family will be there too. It's a special race and the British fans are crazy about motorsport."

Daniil Kvyat: "Leading up to this weekend's British Grand Prix, it's fair to say we've experienced a couple of difficult race weekends, in France and immediately afterwards in Austria. We struggled with the general pace of the car on those two very different kinds of tracks. They didn't really suit us very well and we are trying to get to the bottom of that to find out why. It seems to be the case this year and not just for us, that some tracks suit certain cars better than others. Apart from that, some other teams in our part of the grid have made good progress, but we are working hard on fighting back and will take each race as it comes. I was in the simulator after Austria to understand what we could have done better in the past races and what we can do to improve for the next few ones before the summer shutdown. Hopefully, we will be stronger.

"Like most drivers, I like Silverstone quite a lot. It's a classic circuit and a cool track where you can really enjoy driving a Formula 1 car to its maximum. Making use of all the downforce in those high-speed corners is an incredible experience. Speeds in general have been higher this year, so Silverstone should be quite special. This is one of those tracks where all that training on the neck muscles comes in useful! In theory, this track can be quite demanding physically, but at least the temperatures are never too high in England. One unknown factor is that the entire track has been completely resurfaced again and, on Friday, it will be interesting to find out just how different it is and what the new tarmac will be like. It will be an important factor because the lateral loads on the tyres, with all the high-speed corners here, are very high.

"I like classic races like the British GP, there's always a very big crowd which makes for a great atmosphere. Silverstone is also where I first tested a Formula 1 car - a Toro Rosso - back in 2013. It was one of the most special days of my life!"