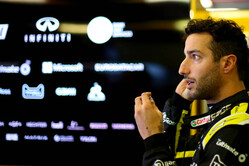 Austria proved disappointing for Nico Hulkenberg who is aiming to put that behind him by focusing on delivering a strong result at Silverstone.

What do you like about the legendary Silverstone?
Nico Hulkenberg: Silverstone is a high-speed circuit with some big corners, which makes it awesome to drive! The run through Maggots, Becketts and Chapel are quite special and exceptionally quick in a modern Formula 1 car. A lap is tough, very physical and you usually feel the aches after the weekend! You need to find a good, high-speed balance on the car to extract the most performance. I enjoy tracks with big corners and lots of downforce. You have to get the most out of the car and it's very satisfying when you get a lap absolutely right. We have some work to do on Friday and we have to begin the race weekend on the right foot to put ourselves in the best possible position for a solid result.

What, in particular, about the atmosphere stands out?
NH: I like the history surrounding Silverstone. Obviously, Great Britain is one of the more historic Grands Prix in Formula 1 history and that makes it special. You can feel the roots of racing there; the British fans always embrace Formula 1 and that creates a great atmosphere. It's the team's second home race, so like in France, it means a lot to everyone and we'll be targeting a good result to put some smiles on their faces!

How are you aiming to recover after Austria?
NH: It was a disappointing weekend and we have some work to do to ensure we make a recovery in Silverstone. We had a very welcome week off to assess everything, recharge the batteries after back-to-back races and find some solutions. I'm confident in the team to get back to it in Silverstone. It's a track I like and we'll be looking to show our true pace.

Daniel Ricciardo is fully focused on Silverstone for the British Grand Prix, as he eyes a return to the points.

Why is Silverstone special to you?
Silverstone will always be a special one for me, as it's where I made my Formula 1 debut in 2011. I've always loved Silverstone, it's a pretty epic track. It just has this nice flow to it, it's all very high-speed and a great venue for Formula 1. You get a real buzz on every lap as there's a lot of brave corners to get right. The British Grand Prix is a race I always get very excited about! The British fans are amongst the most passionate and that creates a really cool, electric atmosphere.

Away from the Formula 1, will you be watching the Cricket at all?
DR: I'll be keeping an eye on the Cricket World Cup throughout the week and weekend. Australia have been doing pretty well so far, so hopefully the boys can bring back some silverware on English soil!

How do you reflect on Austria, heading into the British Grand Prix weekend?
DR: Obviously, Austria did not go to plan. We had been on a nice run of form before that and the aim is to get back to that in Silverstone. We'll be putting in the hard work and I'm confident we'll have a good weekend.

The team left the hills of Austria empty-handed but head to its second 'home race' of the season at Silverstone in determined mood to make an instant response, as Chassis Technical Director Nick Chester outlines.

What's needed to go well at Silverstone?
Nick Chester: We don't expect too many surprises for Silverstone other than learning about the new tarmac. You need good front end grip to deal with the high-speed corners and you can't run too much downforce as there are some long straights. Setting up for Silverstone is always a challenge. Drivers do enjoy racing there as it is a varied circuit. The first sector is a mix of a high-speed run through Turns 1, 2 and 3 followed by a couple of slow hairpins and then the Wellington Straight. From there it's more or less flat-out, especially the run through Maggots, Becketts and Chapel, which is particularly quick nowadays.

What do we know about the new surface at Silverstone?
NC: Silverstone is an interesting circuit with its layout and make-up evolving over the last couple of years. Recently, it's been resurfaced. We can't be totally sure on what it's going to be like until we go on track in FP1 on Friday. Knowing how smooth it is will influence how we set-up the car. In theory, it should be smoother and we'll see how it settles down as the weekend goes on. It should improve session by session and it will make a massive difference to how the tyres operate.

What's the feeling racing on home soil?
NC: It's always nice racing at home. The Viry staff certainly enjoyed the French Grand Prix a couple of weeks ago and now it's Enstone's turn for its home race. We always try for a good result wherever we race, but it's extra nice when you do well in either France or Britain.