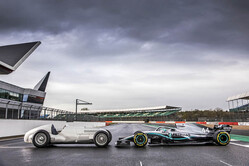 This weekend is a special one for Mercedes, and to mark the ocassion the cars of Lewis Hamilton and Valtteri Bottas will sport a special livery.

"This year's race is a very special event," says Toto Wolff, "we're the title sponsor of the Mercedes-Benz Grosser Preis von Deutschland and the race will mark the 200th start for Mercedes in Formula One. We will also celebrate a remarkable anniversary in Hockenheim: 125 years of motorsport.

"In 1894, the world's first car race was held from Paris to Rouen and the winning machine had at its heart an engine manufactured to the design of Gottlieb Daimler," he adds. "It was the start of a great motorsport tradition that continues to this day and we are incredibly proud to write the next chapter in this legacy. We will run a commemorative livery to pay tribute to our heritage."

Looking back to Silverstone, he says: "The British Grand Prix was a spectacular race and a great showcase for our sport. It was great to see our drivers battle on track in the opening stint; they fought hard but always fair. And it was good to bounce back from the poor performance in Austria with a strong one-two finish.

However, in terms of wins Mercedes is currently on 96, making it the fourth most successful constructor, a position it holds in terms of pole positions, fastest laps and podiums.

In terms of points Mercedes is third with 4774, compared to McLaren (5271.5) and Ferrari (7949.5), despite the fact that points were not awarded to constructors until 1958, and therefore the German manufacturer, which left the sport in 1955 in the wake of the Le Mans disaster, returned to the sport in 2010 with precisely zero.