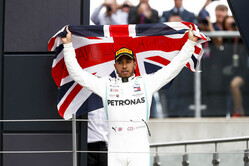 While some are of the opinion that it was the deployment of the safety car that effectively won the British Grand Prix for Lewis Hamilton, the Briton insists that it was his one-stop strategy that did it.

Team boss Toto Wolff has already revealed that at a race morning meeting the drivers had asked for a strategy whereby the driver running second at the time of the pit stops would run an off-set strategy that would see the hard compound being used for the second stint.

Valtteri Bottas made his first scheduled stop at the end of lap 16, however, teammate Hamilton not only extended his first stint, but gained a free pit stop when the safety car was deployed on lap 20 following Antonio Giovinazzi's off.

While Bottas made a second stop on lap 45, despite a number of calls Hamilton opted to stay out on his used hards, running them for 31 laps and posting the fastest lap of the race on the last lap for good measure.

"When he pitted on lap 16 my plan was to off-set as much as I could," he continued, "so I think I went four laps or something and probably could have done another lap or two.

"At the time he was not catching me, which he should have been, but I was keeping the gap the same. I think he came out of the pits seven-tenths inside my window, so I would have pitted and he would be seven-tenths ahead, then it came to one second, one-and-a-half, and stayed around one-and-a-half to two.

"If I did another lap maybe it would have been two-and-a-half and I would have come out on my fresh hards and I could have just sat behind him if I wanted to and he would have had to pit, so would still have had that 21-second gap. So it didn't really make a difference.

"The strategists give us as much information as they can but ultimately I've got to figure out how I've got to get past this guy," said the Briton. If I can't pass him on the track how am I going to out-do him on pace, tyre life, all these kinds of things.

"In the morning I decided going into the race that I was going to do a hard tyre on my second stint but it was a really difficult call for everyone as we only had one hard tyre, and we didn't test it in the long runs, I think only one or two teams tested it, so it was a bit of an unknown how off pace you'd be.

"I was supposed to start the race and save the tyres and I went flat-out from the beginning which was definitely not expected from anyone and Valtteri definitely did not expect it.

"On the long runs, everyone else's tyres were degrading massively and I had the best long run on Friday than everyone. So I'm sure everyone would have seen my data and been looking at how I saved the tyres and tried to do the same, and I just did the opposite! I just went for it and risked it all basically trying to get past. We had a great, great battle which is awesome, I hope we get to have more like that."

Asked about the late calls to pit, which twice saw his pit crew run out into the pitlane, but which he ignored, Hamilton said: "Why take the risk?

"I had a pitstop window," he continued, "but there's the entry of the pitlane, there's the stop, there's the extra pressure on the mechanics to do the pitstop, not that I doubt them at all, but you just give a chance to it to go wrong.

"I had saved enough in the tyres, I felt good with the hard tyre, I could keep going. I did have some blistering, so I was kind of conflicted, thinking should I stop?

"It would have brought us closer, but there were seven laps left, it's very hard to catch a 21-second delta at the pace I could still do, so I decided not to stop.

"It's rare to go against the team," he admitted, "but I decided today that was the best thing for me."