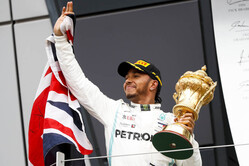 What a difference a year makes...

This time twelve months ago we had a title fight on our hands that involved drivers from different teams, a thrilling Grand Prix at the track where Formula One started, seeing Sebastian Vettel break thousands of British hearts by beating Lewis Hamilton on home ground.

A year on and the German starts sixth on the grid, and despite claims that he'll wait on the 2021 rules package before deciding his future, with every weekend you get the feeling that he's had enough.

Roundly beaten by a new teammate at Red Bull in 2014, it must feel like déjà vu all over again for Sebastian, as Charles Leclerc seems to improve with every race.

However, it isn't just about the arrival of the Monegasque, the rot began to set in just two weeks after last year's brilliant win, when Seb slid off track into the barriers while leading his own home race.

It was the first in a string of errors that have continued into this season, and despite the occasional humorous quip, you can see in his eyes that the passion is no longer there, or certainly not as strong as it was previously.

Whether it can be restored by moving to another team or even taking a sabbatical we don't know, but the fact is that Sebastian Vettel's heart no longer appears to be in it.

Consequently, if we are to see a major shock today, all hopes rest on young Master Charles, who is going for a different tyre strategy to the Mercedes and Red Bull pairs.

Despite this being Lewis Hamilton's home race, would it be awfully un-British to hope that the Stevenage Rocket might once again get beaten on local turf. After all, a win for teammate Valtteri Bottas would rekindle a title race that appears to be following a familiar path at present.

We saw Bottas 2.0 yesterday afternoon, we now wait to see if the Finn has had his porridge this morning or Fruit Loops.

Behind the Silver Arrows and Leclerc we have the Bulls, and still buoyed by his Spielberg win, Max Verstappen is confident he can fight for victory today. Thus far, Pierre Gasly has had a strong weekend, but then again, after finishing a lap down on his teammate in Austria he needs it.

As if Vettel doesn't have enough on his plate, starting from sixth he has the likes of Ricciardo, Norris, Albon, Hulkenberg, Giovinazzi, Raikkonen and Sainz breathing down his neck, who will all regard the Ferrari as an irrelevance as the mighty fight for dominance of the midfield resumes.

While it is a relatively short sprint to T1, the first heavy braking event doesn't actually occur until T3, which means the Ferraris, in particular, could make full use of their softs. Leclerc will be seeking to gain the initiative, hoping that the in-team fight at Mercedes might cause the Silver Arrows pair to take their eye off the ball.

Having had a poor start in Austria, Red Bull and Honda will be keen to see Verstappen get the best possible getaway today, even if thinks didn't work out to badly for the youngster at Spielberg in the end.

This being England, we can expect the weather to play a part, and while there is no rain currently predicted, it remains warmish, while the winds have been causing problems throughout the weekend.

Then there's the new track surface, which has also caused problems, and which, as we have seen, punishes the slightest error. Something to bear in mind when the lights go out and that first lap gets underway.

Indeed, we are almost guaranteed an appearance by the safety car which has been deployed six times in the last five years.

Theoretically, a two-stopper using the hards for two stints would also work well here, but no driver has more than one set of hards available.

Sadly, one team which will play little more than a walk-on support role today is Williams, George Russell and Robert Kubica unlikely to finish on the same lap as the winners.

A far cry from that day forty years ago when Clay Regazzoni scored the first of the teams many wins, the Grove outfit still, despite its current issues, the most successful British team in terms on constructor titles and second only to McLaren in terms of drivers' titles.

On a weekend that the sport recognises Sir Frank Williams 50th year as a team boss, the longest in the history of the sport, it is unlikely that the British team will have much else to celebrate.

Going back a further ten years to 1969, it was here in 1969, that a certain website editor - at that time an awkward, gangly 15-year-old - managed to drop an ice cream into the lap of his hero, Chris Amon as he asked the kiwi for his autograph. Nowadays there would be a selfie of the incident.

On the grid there's a late scare for Verstappen. "We just found a little issue with the endplate, so got permission to change it," reveals Christian Horner.

Other than the Mercedes and Bulls, also starting on the mediums are Giovinazzi, Raikkonen, Sainz, Perez, Stroll, Russell and Kubica. The rest are on softs.

Bottas is warned that the wind has picked up and there is a headwind going into Turn 1.

The Finn leads the field away on the warm-up lap. Indeed, he appears to be in a hurry to get things underway, while Hamilton takes his time.

They're away. Bottas wastes no time in moving across to cover his teammate, as Leclerc holds off Verstappen. Norris is past Ricciardo and by T3 is alongside Gasly.

Hamilton is all over Bottas, first looking to one side and then the other. Into Copse and Ricciardo and Sainz are side by side in Copse, the pair continuing their scrap through Becketts and Maggotts.

Both Haas drivers pit at the end of the opening lap. Replays shows the two clashed at Aintree and they followed the battling Alfa, both picking up punctures in the process.

Just two laps into the race and Magnussen is about to be lapped.

Hamilton continues to pressure his teammate, the Briton really up for it. He almost pulls alongside Bottas at Stowe but the Finn has the line.

The Silver Arrows go wheel to wheel, Hamilton, with the aid of DRS, is alongside Bottas as they exit Brooklands, the Finn going a little too deep, and the Briton takes the lead. The crowd roars.

On the old pit straight however, Bottas is back alongside Hamilton and going into Copse the Finn snatches the lead back, though in fairness the world champion gives his teammate more room than he would normally. Again the crowd roars its approval at what is a thrilling scrap.

As the Silver Arrows continue to battle, Leclerc and Verstappen keep a watching eye.

Ricciardo continues to harry Norris, as Albon is all over the rear of Hulkenberg.

Bottas and his teammate trade fastest laps, as Leclerc falls 2s behind.