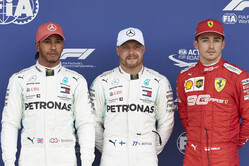 Valtteri Bottas, pole position here at Silverstone. It's been a while - Barcelona your last one - but you must be particularly proud of that one?
Valtteri Bottas: Yeah, it feels very good. It just reminds you of why you do this, these kinds of feelings, but yeah, it's been pretty close all weekend, and today, with Lewis and just really, really happy to get a good lap and be on pole.

Put us in the cockpit. You had the provisional pole you would look at the overlay and realise that Lewis had made a mistake at Brooklands and you know you have to dig deep and find something. You didn't manage to improve on that time but where was your mind on the lap in terms of know how good the previous one was?
VB: Yeah, I knew the first lap was good but it was not perfect. Honestly I should have improved on the second run. I didn't quite get the lap together, especially in the first part of the lap, but I'm glad it was enough. It's not easy to get a good lap together, it's easy to do mistakes and I think everyone was struggling a bit, so happy to be on top.

I'm not sure the crowd are happy with what you've done but congratulations?
VB: Thank you.

Lewis Hamilton, it was close and you worked that hard, but we saw you had that little wobble in the second-last lap in qualifying. Tell us about your actual ultimate lap, it's a tiny gap between you and Valtteri.
Lewis Hamilton: Yeah, firstly, congratulations to Valtteri, he did a solid job throughout qualifying. Ultimately not good enough, We had worked hard throughout the session but it just got a little bit away from us. We sacrificed a lap in Q2, which would have helped get a reading of where the car was, but we didn't end up doing that. At the end I had that mistake on the first lap and the second one just wasn't that great so fair play to Valtteri he did the job. But it's a long race tomorrow, we've got a great crowd here and hopefully I can do something good for them tomorrow.

The crowd are willing you on. It's another grand prix, or is it? It's more than just a grand prix, the British Grand Prix for you?
LH: Yeah, completely. It's the best grand prix of the year and it's really because of the energy the3 people bring. These tracks are great layouts and designs and areas of space but without people like this to fill it up and bring energy it's nothing. That's why we've got the best fans here in England.

Charles, well done, fastest Ferrari driver but that's ultimately not your goal. We looked through free practice and Ferrari looked like they could challenge Mercedes but in the end it was a tough one for you?
Charles Leclerc: Yeah, well, I think also in Q2, up to Q2 we were quite good but then in Q3 Mercedes turned up a little bit the engine, and they were very, very quick also round the corners, that's where we need to work, we know it. Third place is the best we could have done today and I'm very happy about it.

I saw you having a close look at the Mercedes car. This is the one time on a weekend when it's acceptable to be a little bit nosy. Anything standing out there that you like?
CL: No, just looking at the state of the tyres, that's nothing special.

Valtteri, a tremendous lap by you at the start of Q3. Very tight between you and your team-mate. Just how good was that first lap?
VB: It was good. Obviously good enough for pole. There was not much in it between me and Lewis in the end. But still, going into the second run, there were a couple of place where it was clear there was margin to improve so I wouldn't say it was a perfect lap, but I doubt anyone got a perfect lap today. It was not easy to get everything right and super-sensitive to tiny mistakes here and there with this new tarmac and also with a bit of wind. But yeah, I'm happy that it was enough and it's definitely a good feeling.

Valtteri, you now have more poles this season than any other driver. Is that significant to you and have you worked specifically on qualifying this year, something more than previous seasons?
VB: It's not that I have been specifically been working on it. Obviously you always try to improve your performance both on low- and high-fuel, short and long runs. I think the biggest thing for me to work on is the pure race pace definitely, in some kinds of conditions. I mean, year-by-year you are always learning and you get quicker if you work. The main thing is to turn those poles into wins and that's the main thing for tomorrow.

Congratulations. Lewis, motorsport is full of ifs, buts and maybes. Had you not made that error at Brooklands on your first lap in Q3 and got a complete lap in might it have been different?
LH: It doesn't really matter at the end of the day. You can't go back, you can only go forwards. Valtteri did the job, so congratulations to him. And for us, yeah, it just wasn't the best of qualifying sessions. But there's a long race tomorrow so I just have to see how I can convert the position I'm in to progress forward. I think the long run yesterday was good, so I hope we can utilise the tyre advantage we have, in the sense of starting on the mediums, so hopefully we can do a good job with that tomorrow.

Did the track conditions fluctuate a lot during that session?
LH: Not really. It's a little bit gusty here. That's why it's so great here at Silverstone, because it's spread over such a vast piece of land and sometimes it's raining on one section of the track and not another and it's gusty in some places and not so much in other places. It really bodes well for a tough track to finish a lap on.

Charles, like Lewis, you came on the radio and said you had made a mistake on that first run in Q3. Do you feel there was more out there today?
CL: No, I don't think so. Very, very happy with my lap. I think in the last corner I maybe could have done a little bit better, but not much. Overall, I think we are very happy with the performance, very close to Mercedes and we did not expect it. We thought we would be struggling more this weekend. We have been struggling since FP1 with the front end of the car, still in qualifying, but a little bit less. So yeah, it's a good qualifying session for us. Of course, I would have hoped for a higher position, but third is the best we could have done today.

As with Austria you will start the race on the soft tyre, the guys next to you are going to be on the medium tyre. How do you see the tyre war playing out.
CL: Again, it was thought. So we wanted to do that. Again, in Austria it wasn't a bad choice. That's not what made us finish second there so we are pretty happy here too.

(Christian Menath - motorsport-magazin.com) Charles, just following up on the Q2 and the soft tyre. You made the first run on the medium tyre and then set the fastest lap on the soft. Was it always the plan to qualify with the soft, because yesterday's long runs didn't look that great and it was a bit surprising to us that you improved your time?
CL: Yes, it was planned like this. The race run was not great yesterday but it was not due to the tyre, as I said. We had some issues with the front end and I think it got better today, so we will see tomorrow whether we have a significant improvement on the long runs, but it was not due to the tyre.

(Scott Mitchell - Autosport) Valtteri and Lewis: Lewis, after practice yesterday you talked about having a little bit of difficulty with the balance of the car, the rear was stepping out a bit. Did that carry into today or were you happy with the car. Valtteri, you started strongly yesterday, has that just continued and do you just feel very happy with the balance of the car?
VB: Well, yeah, from the very beginning, since the first practice the feeling was quite nice. There was definitely room for improvement, especially with the rear end of the car, mainly on the entry of the corners. I think we managed to get it a bit better. It was still the weakness in a couple of places the rear end of the car but it's not been a massive drama. I managed to build up from yesterday, except for practice three, I was a bit off the pace. I just tried to reset and remind myself of everything I was capable of doing yesterday and it turned out to be good.

And Lewis?
LH: Yeah the car was good. We made a big step forward, so no problems.

(Simon Amberley - Nevis Radio) To Charles: it was mentioned yesterday that maybe the Ferrari race pace wasn't quite as strong as Mercedes, but with the gaps today and the difference on the tyres do you think possibly if you get a jump at the start, of getting Valtteri and Lewis, do you think you can maybe dictate the pace a bit more?
CL: That's definitely the target - to try to use our tyre advantage, especially at the start, to gain positions and then try to keep them. Keeping them will be very difficult because they are extremely quick in race runs but that's the target.

(Livio Oricchio - liviooricchiof1.com) Lewis, from the outside it didn't appear that you had the car in your hands all the time. Is it because of the circumstances or maybe you have a set-up thinking more of the race?
LH: No, the set-up suited race trim best and I think yesterday I really did struggle with it on a single lap and of course I was trying to improve it over the evening and into today. It felt great into P3 and it felt really good at the star5 of the Q sessions and it kind of deteriorated through the session, so it got harder and harder, back towards a similar problem we had yesterday - as you saw in Turn 6 for example. But it was also windy. The race trim is still good. I didn't want to move from the set-up I had, too far away, because it worked so well on the long run yesterday. Fingers crossed the strength in the race should be quite good but again it depends on what position we are in and how the wind is and a bunch of other factors.