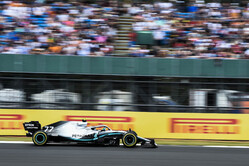 The brand new asphalt at Silverstone, which was only just completed before the grand prix weekend, is extremely dark and slippery. Several drivers had spins and off-road excursions in FP1, with the track then improving as it began to rubber in during FP2.

Despite the marked lack of grip, the top times were still faster than the equivalents from last year in both sessions (0.8 seconds faster in FP2), with similar compounds to 2018.

Mercedes driver Valtteri Bottas was fastest in FP2 on the soft tyre, while Red Bull's Pierre Gasly used the same compound to go fastest in FP1, right at the end of the session.

The new track is a lot smoother than the asphalt it replaces, although a couple of bumps remain. In 2018, the track surface was also new, but it proved to be bumpy and difficult to drain - which is why the asphalt was re-laid again this year.

Although track and ambient temperatures were quite warm - peaking in excess of 40 degrees on track in FP2 - there were some drops of rain in FP1, as well as gusting winds.

The track remained largely dry even during some light rain this morning, but four teams still tried the Cinturato Green intermediates.

The resurfaced track has also altered the kerbing layout slightly, with a 'step' between the new asphalt and old kerbing in some places, as well as deterrents on the outside of selected kerbs to stop drivers going off-line. Keeping to the correct line is vital.

There's currently a performance gap of around 0.7s seconds between soft and medium, while the gap between the medium and hard is more difficult to assess at the moment.

Mario Isola: "Track evolution was the main theme today, with a new and greasy track surface one of the unknown factors as the teams embarked on free practice, as well as some changed cambers and bumps. For these reasons, we saw more spins than usual especially during the morning, as drivers looked for the optimal line. With nobody having run yet on the new surface, it was important to gather as much information as possible today, but it was tough to get an accurate read as the track was evolving all the time, which also makes assessing the performance gaps quite tricky. Nonetheless, despite some interruptions in the morning, the teams achieved their objectives, also setting faster times than they did on the older but bumpier surface last year."