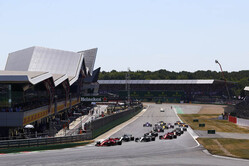 The biggest change at Silverstone ahead of this year's British Grand Prix is that the entire track has been resurfaced.

In addition, the gravel trap at Turn 7 has been increased so it is closer to the back of the kerb, while a double width FIA/FIM kerb will be installed behind the existing kerb at Turn 17.

The controversial DRS zone on the pit straight last year has been removed this time around, and as a result there are just two DRS zones this year.

For the third time this year (after Bahrain and Spain), Pirelli is bringing the three hardest tyres in its range - C1, C2 and C3 - as the hard, medium, and soft.

This is to cope with some of the highest energy demands of the year, thanks to the circuit's fast corners.

Silverstone's defining characteristic is those rapid corners, with the Maggots, Becketts and Chapel sequence in particular - which the drivers enter flat-out in top gear - putting a lot of continuous energy through the tyres. As a result, they are subjected to very high g forces.

The entire track has been resurfaced in order to smooth out the bumps, improve drainage, and accentuate cambers. This could result in even faster lap times.

Silverstone is all about lateral energy rather than traction and braking, although there are also some slower and more technical parts in the Arena complex. Consequently, some degree of compromise is needed when it comes to set-up. It's a circuit where overtaking is definitely possible, but this requires a lot of commitment.

Both one and two stops were used last year, in a race that was (unusually) affected by two safety cars. All the drivers who made a second pit stop did so during the safety car, a tactic that helped Sebastian Vettel to win the race.

"The new asphalt has only been laid very recently," says Pirelli's Mario Isola, "so it's going to be interesting to see what the effect of this will be in competition. It could make a circuit that is already fast even faster.

"We're nominating effectively the same compound selection as we did last year, which should be well-suited to cornering demands that are among the highest of the year, along with places like Spa and Suzuka.

"With the new asphalt and famously variable British weather, there will definitely be a few unknowns heading into this year's Silverstone race. This makes the exercise of data-gathering in free practice even more important than usual, in order to come up with the best strategy."

Silverstone counts as one of the power tracks of the season, with 66% of the lap spent at full throttle in qualifying and 64% in the race, plus an average speed of well over 200kph.

There are six sustained periods of wide open throttle over the 5.891km lap. The Hangar Straight is the longest straight at 875m, which translates to 12s at full throttle. Top speed peaks at over 320kph with DRS open. The other straights are the old pit straight (750m), the straight from Stowe to Club (600m), the pit straight (600m) and the Wellington Straight (700m).

Smooth turbo response is very important at Silverstone as the high-speed turns are interlinked. The sweeping Maggots-Beckett-Chapel complex, for instance, sees average speeds of around 225kph and no lower than 180kph at any one point. The driver needs to keep a rhythm going so he can roll through the complex rather than brake and accelerate repeatedly.

There are several low speed corners for the MGU-K to recover energy and keep the battery at a high level of charge. The Wellington Loop complex and Luffield are the most obvious corners to recover energy. Stowe presents another opportunity for the MGU-K as cars brake from well over 300kph to fifth gear and 180kph.

Fuel consumption at Silverstone will be high since the lap is long and quick but the H and K will be able to recover enough to mean that fuel saving won't be a concern during the race.

This year's event marks the 70th F1 World Championship British Grand Prix. It is one of two ever-present races on the calendar, the other being the Italian Grand Prix.

All of Hamilton's victories have been scored at Silverstone, as were Prost's. Clark, however, won at all three British Grand Prix venues, taking victory at Aintree in 1962, Brand Hatch in 1964 and at Silverstone on the other occasions. He shares that accolade with Jack Brabham whose three British GP wins were scored at a different venue each time.

Sebastian Vettel's 2018 win stretched Ferrari's advantage at the top of the list of most successful constructors at the British Grand Prix. The Italian squad now has 17 wins, three clear of McLaren, with Williams in third place on 10. Four other teams on the current grid have won at this event before - Mercedes have six British GP victories, Red Bull have three, Renault have two, while the inaugural championship event in 1950 was won by Alfa Romeo.

This weekend marks Red Bull Racing's 275th grand prix. The Milton Keynes team made its debut at the 2005 Australian Grand Prix. The team's most recent victory, at the last round in Austria, was its 60th in F1.

Apart from seeking a sixth British GP win this weekend, Hamilton is also going in search of his seventh pole position at this event. Hamilton's first was in 2007, with
McLaren, and since then he has been on pole five times with Mercedes, in 2013 and in each of the last four years.

Only two other drivers on the current grid have pole positions to their name at the British GP. Sebastian Vettel started from the front of the grid in 2009 and 2010
with Red Bull, and Kimi Raikkonen was on pole in 2004 with McLaren.<p>

Hamilton has the most podium finishes here of any driver on the current grid, with a remarkable eight from 12 starts. The only occasions on which the five-time world champion missed out on the podium were in 2009 when he finished 16th, in 2011 when he was fourth, in 2012 when he finished in P8, and in 2013 when he was classified in P4. Raikkonen is next on the list with seven - four in a row with McLaren between 2003 and 2007, and three with Ferrari, in 2007, 2017 and last year.<p>

Raikkonen has the most fastest laps of Silverstone of any current driver, with four. The Finn went quickest in the race with McLaren in 2005, with Ferrari in 2007 and 2008 and with Lotus in 2012.

Two of this year's full-season rookies have stood on the top step of the Silverstone podium on British Grand Prix weekends. Alexander Albon won the GP3 feature race here in 2016 and claimed victory in the FIA Formula 2 race here last year, while George Russell won the 2017 GP3 feature race.

Lando Norris, meanwhile, has made it to the podium here on a grand prix weekend. He finished third in last year's F2 sprint race.