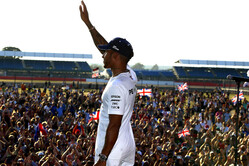 Almost from the day that Liberty Media bought F1 in early 2017 it was known that the future of the British Grand Prix at Silverstone was in doubt.

Months later, as anticipated, the circuit's owners, the British Racing Drivers' Club, activated a break clause in its contract which allowed it to end the 17-year agreement, thereby making this weekend's Grand Prix the last.

The clause was activated on the eve of the British Grand Prix weekend, and almost simultaneously, speaking at the F1 Live event in London, Chase Carey told fans not to worry, that the Grand Prix at Silverstone was safe.

Two years later, and days away from what is currently the last British Grand Prix at Silverstone - or anywhere else - Carey and his team continue to talk the talk but without any visible results.

At the weekend, writing in the Daily Mail, Jonathan McEvoy reported that the event looked certain to be "saved this week as both sides in the long-running saga work frantically towards securing its survival".

"I'm very positive there will be a successful conclusion before the Grand Prix," Motorsport UK boss, David Richards told McEvoy.

"The fundamentals, the financial side, have been agreed," he added. "It is just the final details that need to be signed off, and I am confident they will be."

Much like the long drawn out saga that is the 2021 F1 rules package, it is the devil in those "final details" that complicates matters.

Any agreement will have to make things a whole lot better for Silverstone, and this will either entail a significant cut in the hosting fee or some other financial incentive. Indeed, earlier this year a source close to the talks claimed that the Northamptonshire track was willing to agree to a deal that would essentially see Formula One Management become the event promoter, hiring the track, which at present only receives the ticket money.

Of course, any deal is going to be of keen interest to other promoters who will want to cut similar deals.

Other than the financial side of things, the other elephant in the room is FOM's dream of a Grand Prix in London, something which Pringle admits is a serious threat to the future of the race at Silverstone.

With F1 bosses making no secret of their desire to take the sport into "destination cities", London is looked on as being pretty much the Holy Grail.

While the former management is responsible for the ever increasing hosting fees which caused Silverstone to pull the plug - and should never have been agreed to - Chase Carey, and indeed Liberty, will not want to be seen as being at the helm when one of the most important events on the calendar was lost.

Consequently, the most likely scenario is that a new deal will be agreed. However, rather than the original 17-year contract, the new agreement would be at a much lower fee and run for between three and five years.

This would give Liberty three or so years to continue its negotiations for a London race, while the BRDC would be safe in the knowledge that if a London race does join the calendar before then it won't be lumbered for 17 years with a race which has to 'share' the crowd with a rival.

While a number of drivers have admitted they would love to race on the streets of London, all agree that they would not want it to be at the expense of Silverstone, which they all feel is one of the best tracks on the calendar.

Meanwhile, Red Bull boss, Christian Horner, though keen to retain Silverstone, admits that a race in London would be good for the sport. However, with F1 bosses said to be in talks to host the race in Stratford, scene of London's Olympics in 2012, he admits that any race in the capital would need to include some of its iconic landmarks.

"It's difficult to see it happening on an annual basis, although it would be fantastic as a one-off," he said. "The hospitality from such a race would be astronomical, and the promoters might be less inclined to demand a massive fee up front.

"Still, you would need to see Nelson's Column, Buckingham Palace for it to work," he added. "A London Grand Prix only works if it's proper London. If it's Dagenham, say, it doesn't quite count."

Ironically, in the early 1930s, Ford opened its factory in Dagenham, and though vehicle production ceased in 2002, up until that time 10,980,368 cars had been produced. It continues as a major production site with the capacity to assemble 1.4 million engines a year.

Ford, of course, bought Stewart Grand Prix at the end of 1999, subsequently renaming the team Jaguar. In 2004, the Milton Keynes-based outfit was sold to Red Bull.