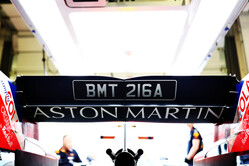 Ahead of today's opening practice session the air temperature is 18.4 degrees C, while the track temperature is 27.5 degrees. It is cloudy and muggy, with a stiff breeze.

The lights go green and the McLaren duo lead the way, followed by Grosjean. Vettel is among the early risers, a mixture of softs and mediums, though Kubica is on hards.

"Is everything fine with the brakes," asks Leclerc, the youngster feeling that there is "something weird... look when I brake".

Giovinazzi heads out in the Alfa, which is sporting masses of flo-vis, albeit only on one side (left) of the car.

Eight minutes into the session all bar Russell and the Mercedes pair have been out, indeed Hamilton is only just leaving his motorhome.

Following several minutes of inactivity, Sainz heads out again as Hamilton finally climbs into his car.

The McLaren, like several others, is sporting a huge aero rake as the teams use the opening session for some much needed testing.

Kubica heads out again, this time on the mediums. Elsewhere, Raikkonen asks for the (Pirelli) barrier outside his garage can be moved as he's concerned that he might hit it if he "goes sideways".

Russell heads out, leaving the Mercedes pair as the only no-shows.

Twenty-one minutes in and the world champion finally heads out.

Oh dear, Grosjean has crashed in the pitlane. As he is leaving the pitlane he loses the rear and clouts the barrier, ripping off the front wing. He then drives back up the pitlane before completing a 180 and heading out on to the track again. As he circulates, minus his front wing, various bits fall from the car.

As previously reported, the Frenchman is running his car with the Melbourne-spec aero package this weekend.

As the VSC is withdrawn, we finally have some times on the board, Norris topping the timesheets with a 31.691, ahead of Hulkenberg, Russell, Kubica, Raikkonen, Sainz and Albon.

Hamilton, who had posted 44.803 on his first lap, due to Grosjean's shenanigans, begins another flying lap as teammate Bottas posts 29.604. Hamilton improves to 31.296 as he reports "no DRS". However, he is informed that the controversial third zone from last year has been removed this year.

Verstappen goes third with a 30.245, ahead of Stroll and Leclerc.

A 29.118 sees Hamilton go quickest. The Briton is on mediums, while Verstappen, who has gone second (29.324) in on softs. Bottas in on mediums and Leclerc softs.

As Norris spins exiting Club, Gasly reports an issue with his clutch.

The session is red flagged when Raikkonen stops on track (T7). As the Finn climbs from the Alfa, radio replay suggests an engine issue. "We broke something," he tells the team. In true Kimi style, he sits on the car as the marshals push it to safety.

The red flag helpfully coincides with the point at which the extra set of tyres have to be handed back. Which is nice.

Still to post a time, Grosjean is back on track. However, he spins at Brooklands, he isn't the first and he won't be the last. "We're having a look, Dude," he is told, having asked "what happened?"

Kvyat improves to tenth on the softs, albeit 2.274s off the pace.

"There is a risk of a shower hitting the track at some point," Hamilton is told.

Albon is the latest driver to fall foul of Brooklands, every driver losing it in the same manner at the same point.

"There may be very light drops at times," Sainz is advised.

As attention shifts to Sunday, the Mercedes pair switch to the softs.

"It's making me nervous," says Hamilton, "there's a strange sound coming from the left of the cockpit."

As if the track surface wasn't difficult enough, the rain begins to fall and Sainz and Verstappen are among the first to find out the hard way.

Leclerc's flying lap is wrecked when he encounters heavy traffic that includes Hamilton.

Meanwhile, Alfa confirms that Raikkonen did indeed suffer an engine issue and as a result there will be a change of unit which means we won't be seeing the Iceman again until this afternoon.

That said, rather than risk their cars most drivers opt to head to their garages, with Sainz left to entertain the crowd. Though eventually the Spaniard also think better of it.

Following another lull, Bottas heads out, followed by Norris. The Finn is on Inters, while the Briton is on slicks.

Bottas subsequently pits and switches back to softs.

Kvyat is told to push on his out lap, paying particular attention to his fronts.

Ricciardo reports that his (soft) tyres are going after just 9 laps.

"What the hell are they doing," asks Vettel as he comes up behind a train of three cars.

Quickest in all three sectors, Gasly goes top with a 27.173.