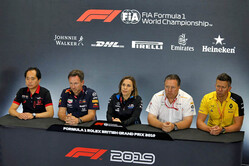 Question for all of you to start with. It was announced on Wednesday that Silverstone has secured a long-term deal to host Formula One. Can each of you give us your best memories of this track?
Marcin Budkowski: It's always a track where we enjoy coming because of the public here. I think it's always a sell-out and it's a very 'expert' crowd, if you like, one which enjoys the racing but also understands the racing. Always claps and supports all the teams and drivers, very little booing, very, very positive crowd, so I think it's always enjoyable - but I don't have a stand-out memory personally here. It's just the quality of the track and of the crowd really that stands out for me.

Zak?
Zak Brown: Yeah, I think this is a great grand prix, very pleased we'll be coming back for at least another five years, and I think if I had to pick my favourite British Grand Prix it would be Nigel Mansell in the Williams in 1987 coming back and passing Piquet. That was pretty awesome.

Claire?
Claire Williams: As Zak said, I'm thrilled that Silverstone has got its place on the calendar long into the future. It's absolutely what's right, we all love coming here. As Marcin said, the crowds, the fans here are just wonderful. I've been coming here for 43 years, something like that. It was the race we were taken to as children, our special treat, the only race that Dad would let his kids come to. I remember being there in those glory days of Williams. We've had so many great races here. I think probably Nigel's time in 1992 with the crowd invasion and all that stuff. For me, it holds such a special place in my heart. During my tenure at DTP, probably seeing our two cars overtake the Mercedes a few years, when Valtteri and Felipe led the race for a few laps. Fine, we didn't go on to do what we would have liked to have done but still, those few laps, I suppose, spur me on, because that's where I want to see Williamses in the future.

Christian?
Christian Horner: It's great news that the British Grand Prix is secured here at the home of motorsport at Silverstone. I think it's the right venue, it's a great track. I have so many great memories from here, been fortunate enough to win this race a few times, also in support formulas. One of my earliest memories coming here was back in 1992, shortly after I passed my driving test in my pimped-up Volkswagen Beetle, and they used to have a Goodyear tyre test here in June, the month before the grand prix. As an aspiring young karting driver I managed to find a hole in a fence - I don't know whether it's still there, around the corner from Copse, go through the tunnel, there's a hole in the fence there, crawled through that, I managed to get into the pitlane, tried to pretend like I looked like I should be there. I had a karting jacket on at the time and came face to face with Ayrton Senna. It was a huge moment for me, he was one of my heroes. He'd had an accident on a jetski and so he wasn't doing a lot of driving but he noticed the kart logo I had on my jacket and started asking me about karting. I thought, 'I can't top that! This day cannot get any better' and then I managed to sneak through a garage and get to the front of the pitlane and Nigel was testing his Williams. I managed to get into your [Claire] garage, God knows how, and overhear Nigel. They were asking him what was preventing him going faster through Becketts? I remember him saying 'I'm struggling to line my eyes up with my eye-sockets, because we're so fast through there!' So that was a huge memory for me, just topped the day off. Meeting Senna, then Mansell, and then driving home in my very flash Volkswagen Beetle.

Marcin, tough weekend for the team in Austria last time out. How was FP1 this morning? Are you confident there won't be a repeat here at Silverstone this weekend?
MB: Yes, we had a very difficult weekend in Austria. I think throughout the weekend really, and we didn't qualify the cars in Q3, we had a difficult race as a result - but also because we didn't' really have the pace at that circuit. We're coming to a different circuit, it's a different challenge here. I think Austria was a particular poor circuit for our car's weaknesses at the moment and Silverstone is a combination really in terms of track, corners, so we expect to be better here, although we're not happy with our general level of competitiveness at the moment. FP1 was a good session. It's a working session. It's one where we experiment on set-up and on different development directions. I think the track this morning was very green: new surface, very variable grip, so I think there was a lot of evolution and we benefitted from this, as I think, did Pierre in the Red Bull as well - but it was a good working session, we learned some things, we fine-tuned the set-up so we're looking forward to the weekend really.

So more confidence ahead of this weekend?
MB: Definitely.

Marcin, you've been at the team for pretty much a year now. From a structural point of view, are you happy with how things are working now at Enstone?
MB: yeah, I've been there a little bit more than a year now. Obviously joined a team that is still in the process of reconstruction. I've found a team that under the previous management and the previous ownership was heavily under-invested. A lot of people left. A little bit, it's a team left behind by the evolution of F1 - because there was no investment in infrastructure, in tools, in people, and obviously when Renault came back there was a lot of investment made, a lot of recruitment. We increased the workforce by more than 50 per cent now. It takes time to integrate all these people, to get all these new tools online, to get the understanding of the physics involved in designing and racing a Formula One car again. So we're in that phase of rebuilding still. It's in a much better place than it was - but there's still some work to do, and certainly since I arrived I've focussed on the organisation structure: putting the right people in the right positions; getting the team to work better; getting the team to be more efficient; to be more creative. It's getting better but there's still some amount of work in front of us.

Zak, coming on to you. You've re-signed Lando Norris for 2020. What's impressed you about him this year?
ZB: I've been impressed with both our drivers. Really pleased with our driver line-up, which is why we wanted to confirm it ahead of the silly season, which seems to be ramping up. Carlos has been extremely quick every weekend and then Lando specifically, he also is extremely quick, a quick learner. He's not making some of the mistakes - knock on wood - that you maybe anticipate from a rookie driver. He drives quite mature, his feedback's good, he gets along with Carlos very well, and both our drivers are driving for the team, so we're just very pleased with their progress, so we thought we'd get that out of the way so we can continue with our programme, head-down and just keep racing.

It is still relatively early in the season to be committing to next year's driver line-up. Why have you committed now?
ZB: We like what we see. Both drivers are doing an excelling job. Specifically in Lando's case, he now has enough races under his belt that we've seen him under pressure, we've seen him having to race his team-mate, we've seen him at the front of the field. We've seen enough rounded elements to his driving to know that he's one of the future stars of the sport. Again with the silly season ramping up, we want to not be part of that, keep our head down and just be focussed on what we're doing.

Tanabe-san, congratulations on the win in Austria last time out, great for Honda. How was the victory received back in Sakura?
TT: Thank you very much. It was a great result and the win came as a result of all of our Sakura members and the people who have worked for this project and they are very much satisfied and pleased. On the other hand, everyone is motivated now more than before, I believe, and we will keep working very hard to improve our performance.

Does this win influence Honda's decision to stay in Formula One beyond 2020?
TT: In my position, as the technical director of Honda F1, I'm not very involved with the contract matters - but I feel, after the win, a very good reaction from inside Honda. So, we will see.

And how confident are you being competitive on all circuits going forward?
TT: We had a great race in Austria - but we know our current position compared to the top runners. There is still a gap there. We keep pushing to get more performance, with our members and also the Red Bull team.

Christian, we're talking about that win in Austria. From your point of view, how unexpected was it?
CH: It was totally unexpected. We thought if we could sneak a podium there it would be a great result, going into the grand prix. And then, about three metres after the start, even a top-four or top-five finish looked to be optimistic after Max got an anti-stall at the start and dropped down to P8 during the first lap - and in the meantime flat-spotted his front left as well. But we could see early on in the race that he had got good pace. He came back through the field quite quickly. We went long on the first stint and we had a great turnaround by the pit crew. And Max's pace in the second half of the race was phenomenal. He was able to catch and pass obviously Sebastian and Valtteri and then close in, and with a few laps to go you think, 'crikey, this could actually happen', here at our home race in Austria. There aren't many races that Dietrich Mateschitz comes to, we had some of the top board members from Honda also in attendance, so to win that race in the manner that Max did was phenomenal. And having come off the back of one of the most boring races in history in France, to have such an exciting race and to come out on top was a phenomenal feeling. And for Honda to win their first race in the V6 hybrid era after the difficult comeback into the sport that they had initially is testimony to the hard work and dedication of all the stuff. It was great to see the emotion and Tanabe-san picking up the trophy on behalf of the team, so it was a great day for the team and Honda all round.