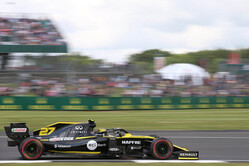 Renault F1 Team put in a productive first day of running at Silverstone Circuit ahead of Sunday's British Grand Prix. Nico Hülkenberg and Daniel Ricciardo opened the team's account with seventh and eighth respectively during the morning's 90-minute practice session and followed up with P15 and P14 in the afternoon.

After the heat and humidity of France and Austria, the reassuring cloudy skies and wind of Silverstone prevailed, keeping track and ambient temperatures stable and allowing completion of a full range of tests.

FP1 focused on set-up evaluation across both cars with an aim of increasing stability on entry and mid-corner balance, particularly in the high-speed corners. The afternoon was similarly constructive, progressing a clear direction on set-up.

There was a bit to learn on Silverstone's new surface, which proved grippy and smooth as the session progressed. Both drivers ran Pirelli's Soft (Red, C3) tyres throughout the morning. Nico began the afternoon session on Medium (Yellow, C2) tyres with Daniel on Hard (White, C1) tyres. Both then switched to Softs with Nico finishing on Mediums. Daniel stopped on track towards the end of the session with an engine issue. He was running a Spec A ICE and will change to the Spec B for tomorrow, as per plan. Daniel will also change chassis for tomorrow after running over a kerb. A small crack was picked up in his tub on inspection after FP2.

Nico: "It was an alright Friday for us today with nothing unexpected. The car felt good on the long runs, but we didn't have the best of runs on low fuel. All in all, though, it wasn't too bad. I'm feeling comfortable, certainly not unhappy and we have the usual things to discuss and work on as ever for a Friday. Our baseline is solid looking ahead to the rest of the weekend. The new surface is definitely high grip, much smoother than it used to be, with the odd bump, which gives the track its character."

Daniel: "We have some work to do following today's sessions but I'm sure we'll get there. I don't feel we will have a difficult weekend ahead. We didn't really make the improvements we felt we could have done in FP2 so we have a bit of homework tonight but I'm still optimistic that we will be better than what we showed today."

Nick Chester, Chassis Technical Director: "A pretty good first day of running for us. FP1 was useful as we tried some things that gave us some direction on set up, particularly for the high-speed corners. FP2 was similarly fine, but we got caught in some traffic, otherwise we would have been further up the order. Daniel unfortunately stopped early with an engine problem; he was running a Spec A and will revert to his Spec B as planned and previously introduced. We have a few things to do ahead of tomorrow's running, but it's super tight so finding just a little bit will put us squarely into Q3."