Williams have no plans to replace Kubica 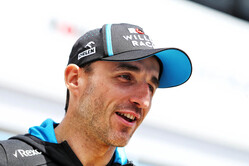 It's fair to say that Robert Kubica's return to the F1 grid has not been quite the fairy-tale the Pole of his fans had hoped for.

While the uncompetitiveness of the Williams hasn't helped matters, Kubica has struggled against a rookie teammate who many see as a world champion in the making.

In recent weeks there has been media speculation over the Pole's future at Williams, with some claiming that he will be quietly dropped over the summer break, with talk of Esteban Ocon replacing him.

However, speaking as the British Grand Prix weekend got underway, a weekend which will witness celebrations of her father's 50 years as a team boss, not to mention the 40th anniversary of the team's first Grand Prix win, team boss, Claire Williams dismissed the speculation.

"I find this speculation quite frustrating," she told reporters, "because unless you actually know on the inside you don't know what is going on.

"Our relationship with Robert is as strong as it was," she continued. "He is getting his head down, doing what he needs to do and we're trying to do everything that we can to give him a better car so that he can perform at the level that he wants to.

"As far as I am concerned there are no frustrations certainly from our side," she added. "I am sure he has a level of frustration because he doesn't have the equipment that he would like at the moment."

In the wake of McLaren's decision to retain its current drivers for 2020, when asked if her team is close to finalising its plans, Williams said: "We're only halfway through the season, so it's a little early for us to start thinking about 2020 and a driver line-up for next year.

"Saying that, we have started to think about it, but we're in no position to be making any final decisions yet. And that probably won't come until the third quarter of this year. But there is no thought about replacing Robert at all during this season. Absolutely not."

She was also keen to dismiss media claims that teammate George Russell is being given better equipment.

"There is absolutely no difference between George and Robert's cars," she said. "We don't have the budget to create two different types of race cars, so this speculation is just crazy.

"We do everything to make sure that both George and Robert have the same equipment and the same test items as every weekend, so that we can to give them the best opportunity for Saturday and Sunday."

Asked about Russell's future with the team, the Briton seen as a potential teammate for Hamilton at Mercedes, she said: "We haven't had any conversations about George potentially leaving the team in the short term because he's on a long-term contract with us.

"Personally I feel he is world champion material and why would I want to lose him from our team? I would do everything in my power to keep George Russell at Williams.

"My ambition is that one day we will be able to provide George with a car where he can start competing at the top of the midfield and then hopefully for podiums. George is a big part of Williams' future."