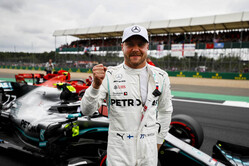 The more sceptical among you might wonder whether Ferrari taking a leaf out of Toto Wolff's book, by seriously playing down one's own chances while talking up the opposition.

Following yesterday's sessions it was all doom and gloom at the Maranello squad, which was struggling and fearing what would happen when Mercedes turned up the wick.

This morning, and like magic, Leclerc and Vettel are quickest, while Lewis Hamilton insists his car can't give any more.

Thankfully, as they say, when the lights go out the bullshit walks, and over the next hour we should have a far better idea of who exactly is on the back foot.

Meanwhile, at Red Bull, for the third straight session, Max Verstappen was out-paced by his teammate. Following what he described as his worst Friday ever yesterday, the Dutchman appeared to have rediscovered his mojo this morning, until Pierre Gasly dug that little bit deeper.

As ever, the midfield is where its really happening, from 7th placed Norris down to 18th placed Perez covered by less than a second.

Accepting that a second is hell of a lot in F1, realistically, we're looking at McLaren, Renault and Toro Rosso to be battling for Q2 and the Q3 leftovers this afternoon, Haas, Alfa Romeo and Racing Point clearly struggling... but not in the Ferrari sense.

While the wind has died down after yesterday's fun and games, this morning the weather gods decided to throw in some rain, so all things being equal we can expect snow at some point over the next hour and a plague of frogs tomorrow.

In the moments before the session gets underway, Hamilton walks out of his garage and waves to the fans in the stands opposite.

The lights go green and Albon leads the way, followed by Raikkonen, Norris, Hulkenberg, Giovinazzi, Kvyat and Grosjean, all are on the softs.

Some out-lap jiggery-pokery sees the Alfa pair emerge ahead of the rest of the field. Raikkonen posts 27.501 and Giovinazzi 27.710, but Grosjean responds with a 26.753.

The times tumble as more drivers head out, Sainz taking the top spot with a 26.689.

The Ferrari pair head out on mediums, while the Bulls are on softs. Vettel complains that he was unable to activate DRS at a number of corners.

Having messed up his first lap, Hulkenberg looks set to improve, the German going quickest in S1.

Raikkonen goes second and Giovinazzi third but both are demoted when Albon posts 26.482 to go quickest.

The softs are clearly good for more than just one hot lap as Norris goes top with a 26.079.

The Mercedes pair head out on softs. That 25.628 from Leclerc, of course, set on the mediums.

With 5 minutes remaining, along with the Williams pair, Grosjean, Stroll and Perez comprise the drop zone, with Giovinazzi, Kvyat, Raikkonen, Magnussen and Hulkenberg hovering.

A number of drivers have strong opening sectors, but lose time in S2.

Mercedes sends Bottas out again, even though he is fourth, Verstappen and Vettel also go out, the German now on softs.

PBs in all three sectors see Raikkonen go 13th, while Kvyat and Stroll fail to improve.

Hamilton is first out for Q2, followed by his teammate, Mercedes clearly aware of some dark, dark clouds in the distance.

Despite being on the faster tyre compound, Vettel cannot match the times posted on the mediums, the German eventually crossing the line at 26.529 to go eighth.

Raikkonen improves but remains 14th, the Finn facing elimination along with a Albon, Perez, Giovinazzi and Grosjean.

A 25.848 sees Verstappen leapfrog his teammate to go fourth. "Look after these tyres, likely race start set," he is advised.

Grosjean fails to improve on 15th, and looks set to miss the cut.

It is revealed that Vettel's time was set on an old set of the softs.

"I really don't understand what's going on, it's not the same tyres," complains Grosjean, who is running Melbourne-spec aero this weekend.

As the clock counts down, all 15 drivers are on track, Vettel on a new set of softs. Hamilton sticks with the mediums.

Hulkenberg goes quickest of all in S1, as Perez fails to make the cut.

All eyes on Vettel, who posts a 26.023 to go fifth, the German now set to start the race on softs, as will Leclerc who improved to 25.546 on the red-banded rubber.

"That was not nice," admits Sainz.