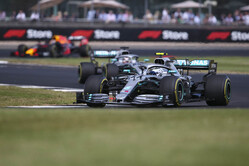 Speaking at the end of a race he could have won, Valtteri Bottas admitted that he was wrong to think that a one-stop strategy wouldn't work. Ignoring the timing of the safety car, which played a crucial part in the outcome of the race, the Finn didn't believe the hard tyres could last as long as they did.

"In our strategy meeting in the morning, the drivers brought up whether there was an off-set strategy possible for the guy running second," explained Toto Wolff, "because if you put them on the same tyre, this is probably how the race is going to end.

"So picking up on the suggestion, we decided that the second-placed driver would run an off-set strategy with the hard tyre in the middle.

"We weren't quite sure whether one stop would make it," he admitted, "rather thinking it would be a two, also because of a lack of data on the hard, and this is exactly how it panned out.

"Both of them drove a brilliant race, both of them would have deserved to win the race, and in that instance, the safety car swung in the favour of one driver."

"Definitely there was an idea to split the cars," confirmed Bottas, "one of us going for hard for the second stint. But the idea was for that car to do medium-hard-medium. We thought one stop was honestly out of the question today and that was a mistake from our side. It was by far the quickest strategy, the medium-hard, but we thought it would be much slower."

Holding off Hamilton in a thrilling opening to the race, Bottas made his first stop at the end of lap 16, rejoining in third behind Hamilton and Vettel. However, the subsequent safety car gave Hamilton a 'free' stop, allowing the Briton to rejoin still leading.

While most around him, not least his teammate, subsequently needed to make a second scheduled stop, Hamilton ran the remainder of the race on his hards, effectively rubbing his rivals noses in it by posting the fastest race lap on the final lap, on tyres that were 32 laps old.

Wolff admits that his team may need to rethink its policy in terms of strategy, if only to dispel claims of bias.

"The discussion we had with them in the morning was that if you were to put them on the same tyre, on the same strategy, basically Turn 1 or Lap 1 would lock in the result," said the Austrian, "and we felt that picking up on their suggestion would provide an interesting race.

"It still overlapped on many instances," he continued, "we knew they would be racing each other, but then maybe with a different strategy, so that's what we tried.

"In hindsight, we need to look at it, are we favouring somebody unconsciously, which we wouldn't want to do. So for sure it created more experience and more data for us to judge whether it is something we would want to do in the future."