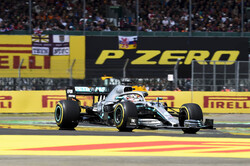 Mercedes driver Lewis Hamilton won a thrilling British Grand Prix for the sixth time with an unexpected one-stop strategy, having switched from medium to hard tyres under the safety car before the halfway point of the race. He was the only one of the top three to stop just once, winning with a margin of more than 20 seconds and shattering the existing lap record at the end of a race in which every P Zero compound performed extremely well.

There was a wide variety of strategies seen throughout the 52-lap race, with four different strategies in the top five.

Only Mercedes and Red Bull started on the medium tyre from the top 10 of the grid, with Mercedes finishing first and second, and Red Bull fourth and fifth.

Ferrari's Charles Leclerc was the highest-placed driver to begin the race on the Red soft tyre, finishing the grand prix in his qualifying position of third.

The safety car marked a turning point, with nearly all of the frontrunners (with the exception of Mercedes driver Valtteri Bottas) using it to make a pit stop.

Conditions remained dry and cool throughout the race, but there was no rain at all, unlike the previous two days at Silverstone.

Mario Isola: "All three compounds played an integral part in a fantastic race today, with perhaps the most remarkable performance coming from the hard tyre with Lewis Hamilton, who claimed the fastest lap just before taking the chequered flag, on a set of tyres that had already covered 32 laps. And this on one of the most demanding circuits of the year, with energy loads in excess of 4g through some of the corners. From start to finish we saw a highly entertaining race with plenty of action and close battles. The safety car was a decisive element, which effectively split the race into two sprints as most drivers took advantage of it to make a pit stop. The decision to pit Hamilton from the medium to the hard during this safety car proved to be a key element of his victory. Now we look forward to continuing our development of the 2020 compounds, with two days of testing with Red Bull and Williams at Silverstone."