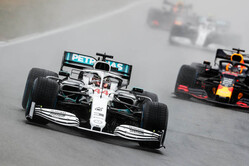 Still feeling the effects of the bug that almost saw him miss the German GP, Lewis Hamilton has cancelled his schedule in order to be ready for Hungary.

After qualifying on Saturday, the world champion revealed that having been taken ill on Friday evening, Mercedes had begun preparations to replace him, most likely with Esteban Ocon, for the remainder of the weekend.

While the Briton soldiered on and took pole, in the wake of yesterday's disastrous race, described by some as his worst-ever performance, he has opted to rest ahead of next weekend's Hungarian Grand Prix.

“It's not really improving massively," he added, "but hopefully over the next couple of days it will.

“I don't think being in the car is any good and health is so important so I'll just try and make sure I'm as healthy as I can be for the next race.”

Looking set for victory in a race which was forever changing due to the conditions, an unforced error which saw him damage his front wing after clouting the barriers at the final corners where Leclerc and Bottas came to grief, the Briton's misery was compounded by a botched pit-stop and then a penalty for entering the pits incorrectly.

"Honestly I don't remember," he said, when asked what was going through his mind during the pit stop. "I was Probably pissed off that I made a mistake in the previous corner and angry at myself probably.

"Ultimately it was a combination of things that went wrong," he sighed. "It's massively disappointing and upsetting for all of us to be leading a grand prix, I was eight seconds in front at one stage and I had it all under control.

"Things are going to be thrown at you all the time in conditions like this," he continued, "but I think one step was like one domino after another, like Snakes and Ladders almost, and I kept hitting the snakes.

"But we win and we lose together, so it just shows you how easy it is to get a weekend wrong and the processes wrong. But we stay united, we pull together."

Asked about his previous stop, which ultimately was to prove the game changer for the Briton as he switched to slicks at just the moment it began to rain again, leading to his off moments later, he said: "The turning point was when they put slicks on when it was still wet, as they pulled me in I could see there was more rain coming down. But they have usually more knowledge than I do and if I said to put the inters on and it was the wrong call, it could have been costly.

"As it turns out by not telling them to put inters on when others had put slicks on and were doing OK, I think it just happened at the time when they put my slicks on at the same time as Leclerc went off, it just started to rain more. The timing was off."

Though he finished eleventh on the road, the subsequent time penalties handed to the Alfa Romeo drivers - which are being appealed - saw the world champion promoted back to ninth and into the points.