Wolff denies team took its eye off the ball 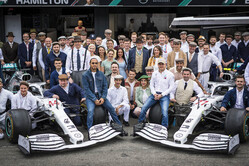 In the moments following one of the most incident-filled races in living memory, Mercedes boss, Toto Wolff claimed that his team's equally poor performance was "karma", suggesting that it had been distracted by its celebrations of 125 years of motorsport and its 200th Grand Prix and having given access to Netflix for its Drive to Survive documentary series for the first time.

"This shows that you shouldn't fool around with the staff," he told Sky Sports. "You should concentrate on the job.

"We are not superstitious, but we believe in karma and it's a day to learn.

"I think we had a decent start with good pace. Then you had incidents, crashing out in tricky conditions, the wrong calls."

"It was unfortunate, crashing right at the entry of the pit lane," he said of race leader Lewis Hamilton's crash and the subsequent pit stop. "We were not prepared, we made the wrong calls afterwards, it was all coming together.

"Many others made the same mistake," he added. "Leclerc crashed and many others crashed."

However, later, speaking to reporters he denied that the Netflix documentary and event celebrations had compromised his team.

"It's motor racing," he said. "And sometimes you've got to take a slap on the nose, on the chin as you say, and just learn. These are the days that make us better.

"We've got to think about what went wrong today," he continued. "If things come together, like with Valtteri crashing out at the end... I mean, this ends in an Armageddon weekend for us.

“Whether we are celebrating 125 years, have the board here or the Netflix guys, plays no role at all," he insisted, "probably we've given them more content than on any other normal weekend. So, we've got to stick our heads together tomorrow and learn."

As Wolff says, "it's motor racing", and on what was a thoroughly entertaining day, the German team's celebration of its history, and the manner in which it went about it, added another element to the whole weekend.