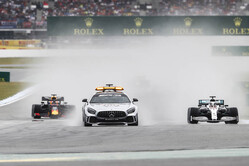 A nightmare race for Lewis Hamilton proved not to have a further sting in the tail when it was revealed that claims of him driving unnecessarily behind the safety car was actually due to a system error.

On a day that started so well for the Briton, the ever changing weather conditions were to lead to wrong strategy calls, errors, a spin, a pit stop which caught the team off guard and a subsequent time penalty for entering the pits incorrectly.

Then, when it seemed it couldn't get any worse, it was revealed that the Briton was under investigation for driving unnecessarily slowly behind the safety car.

However, the stewards, having reviewed video, radio, telemetry and delta time evidence, found that while Hamilton appeared to be going unnecessarily slowly during the safety car period, relative to the cars in-front of and behind him, this was because he had pitted due to his own incident during the VSC/Safety Car period, and due to the subsequent long pit stop, he had completed one less lap under the safety car than the cars around him.

"This meant that he was obliged to drive to the delta time, while the cars around him were attempting to safely catch the Safety Car, thereby giving the appearance that he was driving unnecessarily slowly, whereas he was following the regulation.

Consequently, no further action is required.