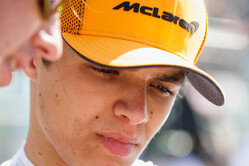 Lando Norris is to start from the back row of today's German Grand Prix after McLaren changed a number of his power unit components.

The Briton, who felt he under-performed in qualifying, having failed to make it into Q2, was subsequently found to have a battery-related issue.

On further investigation his team opted to change his battery pack along with a new MGU-K and control electronics, thereby demoting him to the back of the grid alongside Sebastian Vettel. However, as the German didn't post a time in Q1, and therefore didn't officially qualify, he will still start from 20th while Norris will start 19th.

"I didn't put my sectors together when it counted on the sectors and that cost me," said Norris after qualifying. "There was nothing too much, a quarter of a tenth... very small mistakes which cost that much and stopped me getting into Q2.

"I'm frustrated," he admitted, "but at the same time it's the first time this year that I've left myself and the team down. The car was there or thereabouts where it needed to be. But this is the first time I've let the team down when there was more potential in the car, and Carlos was in Q3 again. We need to move on and look to tomorrow."