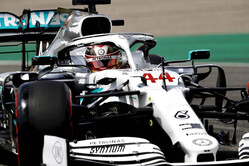 As if the uncertainty over the weather wasn't enough, what with the rollercoaster temperatures and the threats of storms of Biblical proportions, this morning the drivers found themselves facing a new threat... track limits, and the exceeding of such.

Yesterday, drivers had pretty much had Carte Blanche to do as they wished, but this morning that all changed, as a number of drivers, including Lewis Hamilton and Sebastian Vettel, found to their cost.

"Any part of the car" which runs over the blue and white kerbs on the outside of the first and final corners will result in the time being deleted... and so it came to be.

Charles Leclerc continued from where he left off yesterday, the youngster absolutely blitzing the field.

For much of the session it looked likely to be a Ferrari 1-2, but then Max Verstappen split the Maranello pair with a banzai lap.

That said, Sebastian Vettel clearly doesn't have the same confidence in his car that his teammate, or is that the impetuosity and daring of youth.

Poor Lewis Hamilton had a miserable time, be it the retro gloves that didn't fit, having his best time deleted for abusing the track limits or generally struggling to keep pace with the red cars.

Star of the show was Kevin Magnussen, who was thrilled that his car felt "completely different" to yesterday, even though the team had made no changes whatsoever.

With 4th (Bottas) to 18th (Ricciardo) covered by a second, it really is a case of 'anything could happen', and add in the uncertainty over the weather, those track limits and whatever Lady Luck might have in store, and we could be in for an unusual grid line-up, and an even more unusual race.

That said, ahead of qualifying the air temperature is 28.1 degrees C, and the track temperature 44.9 degrees, as the sun beats down on Hockenheim, but a little less intensity than yesterday's Lawrence of Arabia conditions.

Suddenly however, some dark clouds appear in the distance, at which point Race Control claims a 60% possibility of rain.

In the moments before the start of Q1, work is ongoing in the McLaren garage, particularly Sainz' car.

The lights go green and Kubica leads the way, followed by his teammate, both running the much anticipated updates.

Kubica crosses the line at 16.125 to get proceedings underway, but moments later his teammate posts a 15.682.

Things get a little more sensible when Stroll posts 13.393, watched on by driver coach Pastor Maldonado.

No sooner has Vettel headed out than he reports a problem, having lost power. He is told to pit.

Verstappen goes quickest with a 12.593, despite only being quickest in the final sector.

Moments later however, Leclerc crosses the line at 12.229.

Hamilton begins his first flying lap and in S1 he is already 0.4s off the pace. The Briton subsequently posts a 13.842 to go 13th, which means he's going to need to run again.

Ricciardo goes fourth, ahead of Grosjean and Magnussen, as Bottas heads out.

Disaster for Vettel, clearly the issue cannot be resolved and he climbs from his car.

PBs in all three sectors see Hamilton improve to third with a 12.852.

Grosjean complains that his seat belt is loose.

With 3 minutes remaining, Albon, Norris and the Williams pair are in the danger zone with Vettel, with Giovinazzi, Perez and Gasly hovering.

Sainz improves to ninth, as the final assault begins.

We lose Norris, Albon, Russell, Kubica and, of course, Vettel, who seemingly suffered a turbo-related issue.

Hamilton is first out for Q2, the Briton sporting mediums. He is subsequently joined by Bottas and Leclerc, who similarly are running with the yellow-banded rubber.

Ah, it appears Leclerc had exceeded the limits at T1 which is why he aborted the lap. On his next run he posts 12.344 to go second.

"No power, I lost power on the straight," reports Verstappen. He is told to pit.

"Are my gears synced," asks Gasly. He is told that they are.

Verstappen heads out again, his issue hopefully solved. He is now on softs.

His out lap is very, very slow as he seemingly conserves his softs for that one flyer. Just as it appears that he might in fact have a problem, and the crowd rises, he presses the pedal to the metal.

A big, big lock-up for Magnussen in T2.

Stroll gives 100% but fails to make the cut, while Kvyat also fails to improve.

Raikkonen goes quickest in S2, finally crossing the line at 12.519 to go sixth.

A late improvement is bad news for Magnussen, while Hulkenberg then demotes Giovinazzi.

The Mercedes pair are first to head out for Q3, Bottas leading the way.

Meanwhile, there is lots of activity in both the Ferrari and Alfa garages, involving Leclerc and Raikkonen's cars respectively.