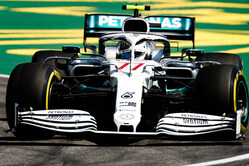 Although Lewis Hamilton admitted that it had not been the "best of days" due to the heat, with both the world champion looking unusually ragged at times, it could have been a whole lot worse.

However, lessons learned in the heat of the Red Bull Ring saw the German team introduce a cooling update as part of its raft of upgrades brought to Hockenheim.

Indeed, Valtteri Bottas believes that without the update his team would have struggled.

"I think we have made progress," said the Finn. "I think with the package we had in Austria, we would have struggled massively to run. But now we could complete some good long runs and it is going to get a lot better on Saturday and Sunday with the temperatures, so it is good to see we have been able to improve that.

"It was extremely hot," he added, in a masterpiece of understatement. "I cannot remember driving in these kinds of conditions, but anyway, it is the same for everyone.

"It makes it more tricky for the drivers and the cars and tyres, with lot of overheating especially in sector three with the corner combinations. It becomes so sensitive. You slide a bit more and you pick up ten degrees of extra tyre temperature and you can lose a few tenths like that. So quite sensitive.

"The weather is going to be completely different tomorrow and on Sunday with lower temperatures and a chance of rain," said the Finn. "So we will need to be very dynamic reacting to the weather with the car set-up. We haven't really run in the wet this year, so I actually hope for rain, it would be nice to drive in the wet."

"These tyres don't like the temperature so we had to do very slow out-laps and the tyres don't last very long," added Hamilton. "It's all about trying to keep the tyres in the working range. They were always overheating, so that's been the main issue today, but we're all in the same boat.

"We're hoping the weather won't be like this for the rest of the weekend. If it's cooler and it's dry, nothing from today really applies, the tyres will come back towards us and everyone will be quicker and more comfortable on the track."