Leclerc sets the pace in FP2 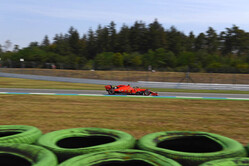 Sebastian Vettel led a Ferrari 1-2 earlier, however it must be pointed out that the German and his teammate were on the softest rubber available, while third-placed Lewis Hamilton was on mediums.

That said, both Silver Arrows looked ragged, unlike the Ferrari, and both Hamilton and teammate Valtteri Bottas will be looking forward to tomorrow when the temperatures fall and rain is forecast.

Max Verstappen was fourth and Pierre Gasly sixth, ahead of Sainz, Grosjean, Stroll and Ricciardo.

Racing Point is one of a number of teams that has brought a significant upgrade package here, and based on the evidence thus far it's having an impact.

Likewise Williams, where Robert Kubica out-paced George Russell, the Pole clearly benefitting from the Grove outfit's upgrade while his teammate ran his car in the old spec.

The lights go green and Norris leads the way, followed by Magnussen and Grosjean. The Dane on mediums and his teammate on hards, as is Norris.

Magnussen goes quickest of the three, the Haas driver crossing the line at 16.214.

More and more drivers head out, a fair mixture of mediums and hards.

"Obviously the high temperatures mean that there's more thermal degradation," says Pirelli, "so we're seeing the hard tyres out as well, which cope better with hot conditions. The weather may change over the weekend though, so hard to know if today is representative."

A 15.177 sees Raikkonen go top, as Kubica's Williams is up on its stands and not looking likely to run any time soon.

"Can we do an even slower slow lap," Norris is asked.

While the Silver Arrows and Bulls opt to wait, the Ferraris head out. Leclerc goes quickest (14.569) on the hards while teammate Vettel (14.804) goes second on the mediums.

"It's quite tricky to drive like this," says Leclerc, "who feels that his pedals are to close.

Gasly goes third with a 15.089 on the mediums, the Frenchman taking full advantage - and then some - of the kerbs, particularly in the final corner. Elsewhere, Ricciardo looking very scrappy.

Bottas goes third (14.794), having been hampered by traffic.

"A bit of a vibration," reports Russell, "but nothing crazy."

Twenty minutes in and Verstappen makes his first appearance of the afternoon. He's on the mediums.

"The front-left is not in good shape," warns Vettel, "maybe you can balance it for later."

As Verstappen goes third (14.740), Bottas goes quickest in S1, finally crossing the line at 14.467 to go second to his teammate by 0.011. That said, Hamilton subsequently improves to 14.074. The Briton, remember, is on mediums while his teammate is on hards.

Behind the 'big three' or 'big six' or whatever you wish to call it, Raikkonen remains best of the rest, ahead of Grosjean, Stroll, Sainz and Perez.

Grosjean is the first to switch to the softs.

"I downshifted by accident in Turn 1," admits Verstappen.

Sainz and Stroll head out on the red-banded rubber.

Vettel is the first of the big guns to turn his attention to qualifying, the German posting two purples and a PB on his way to a 13.573, the German losing out in the final sector.

Despite traffic in the stadium section, and 'only' posting PBs in all three sectors, Leclerc goes quickest with a 13.449.

Hamilton goes third (13.595), going quickest in the final sector despite running wide and kicking up a cloud of dirt.

Another scrappy lap from Bottas, who runs wide in the penultimate corner, the Finn crossing the line at 14.11 to go fourth, 0.662s off the pace.

As was the case ay Silverstone, Verstappen complains of a "lack of power". He is subsequently told that the team "understands the issue" and he is told to pit, The Dutchman responding that it is now working again.

Unable to get any closer than 0.146s to Leclerc, Hamilton abandons his lap and heads for the pits.

"They're unreal these people," complains Raikkonen, "I had to step on the brakes." The guilty party appears to have been Magnussen.

The cameras pick up on Pastor Maldonado, who is driver coach to Stroll.

"I'm not learning anything with this," says Vettel, "box?"

Once again, Bottas gets it wrong in the penultimate corner, the Mercedes pair continuing to look scrappy. The Finn is told to pit where some flap will be taken off the car.

Perez is told that his pace is similar to the Toro Rossos and Renaults.

Problems for Ferrari as Leclerc pits and the car falls off its front jack.

When Hulkenberg complains that his boost is cutting out, he is told that it will be fixed for tomorrow. A situation most of us can identify with.

However, it is clearly more serious than Renault thought and the German grinds to a halt near pit exit.

Moments later the session is red-flagged when Gasly loses the rear of his Red Bull exiting the final corner, and hits the barriers, damaging the left-hand side of the car. "I lost it," he admits.

The session resumes with nine minutes remaining, Verstappen first out on to the track.

Among the first out is Hulkenberg, who subsequently reports that his boost issue has returned.

"I hear something a little bit strange under braking," reports Leclerc.

"Brake pedal failure," says Sainz, as he gingerly heads into the pitlane.

With tomorrow's predicted change in the weather, what with temperatures significantly down and lots of rain, today's sessions are pretty much unrepresentative.

That said, Ferrari looked strong, and while Grosjean and Stroll were best of the rest, suggesting that Racing Point has taken a step forward with its upgrade, the fact that Russell was quicker than Kubica must have Williams puzzled.