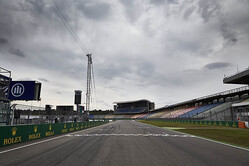 A number of minor changes have been made at Hockenheim ahead of this year's German Grand Prix.

The debris fence on the outside of Turn 1 has been replaced, while the barrier to the left of the track between Turn 11 and Turn 12 has been realigned.

As was the case at Silverstone, Hockenheim will feature just two DRS zones this year rather than the three seen in 2018, the pit straight DRS zone having been removed.

For the sixth time this year, Pirelli brings the C4, C3 and C2 compounds, having previously used this combination in Australia, China, Azerbaijan, France and Austria.

This is broadly equivalent to last year, when the 2018 medium, soft, and ultrasoft compounds were chosen.

There is no particular defining characteristic, the lap is a mix of corners and speeds, with some fast sections as well as the slower and more technical Motodrom stadium complex.

There have been no significant changes to the asphalt, which is medium in terms of energy loading and abrasiveness. Track evolution over the course of the weekend is generally quite low.

Lateral and longitudinal demands are about equal over the course of the lap, which in theory means that it shouldn't be too hard to find the right set-up and get the tyres working optimally.

In a race remembered for Sebastian Vettel's unforced error, the rain made the strategy almost impossible to predict last year, Lewis Hamilton winning with a one-stop strategy (the only driver in the top six to stop just once) going from soft to ultrasoft.

There was also a safety car, with Max Verstappen finishing fourth despite stopping three times. Historically, the safety car probability is around 50%.

Understandably, Lewis Hamilton heads into the weekend as favourite, certainly as far as betting is concerned, the Briton quoted at 8/13. Valtteri Bottas is second favourite at 5/2 ahead of Leclerc (10/1) and Max Verstappen and Sebastian Vettel.

While Friday is likely to see temperatures hit as high as 39 degrees C, Saturday should see highs of around 29 and Sunday 25. However, there is also the likelihood of thunderstorms on Saturday and Sunday.

Of the top three teams, Red Bull's drivers are the only ones to make identical tyre choices: the Mercedes and Ferrari drivers have all picked something different, with Ferrari opting for the biggest quantity of soft tyres.

"Hockenheim is not a track that the teams are historically completely familiar with," says Pirelli's Mario Isola, "for many years it alternated with the Nurburgring, then it dropped off the calendar entirely, before returning last year.

"Nonetheless, there's nothing about the track that is particular surprise, with the demands and forces on the tyres being quite balanced. One exception is the Motodrom section, which is a bit more stop-and-go, while another thing to be aware of is the camber on Turn 12 and Turn 13.

"Wear and degradation is generally low, so in the past we have seen some quite long stints on the tyres. As we experienced last season though, the weather is hard to predict in Hockenheim at this time of year and this could certainly be one key element influencing strategy."

Approximately 65% of the lap is spent at full throttle thanks to the four long straights. The Parabolika straight is over 1km long, putting it on a par with the longer straights of the season in China and Abu Dhabi. The power units will spend over 14 seconds at full throttle, one of the longest single outright times of the year.

Drivers will reach over 300 km/h on three occasions during the first two thirds of the lap. The ICE and turbo are therefore subject to heavy loading.

Energy recovery under braking is relatively easy since the straights are linked by medium to low speed corners such as the Hairpin and the old Stadium complex. This is good news as far as carbon fuel consumption is concerned.

The latter part of the lap, which includes a slow 60kph hairpin, a right hand flick and then the renowned stadium section, is taken at a much lower average speed than the first part of the lap. The tight, twisty nature of this part of the track demands good braking stability and engine torque response, particularly through the stadium, which is taken at an average of 200kph.

With such large loads going through every part of the power unit, everything will get very hot. High ambient temperatures will only compound this challenge. To prevent against any potential overheating issues it is likely teams will run a different cooling configuration and use the PU elements in a slightly different way.